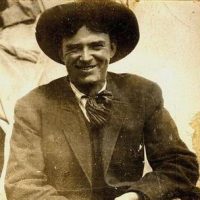 William Gollings’ lifelong artistic preoccupation was similiar to famed western artist Frederic Remington. Like Remington, he longed for a forgotten west, and went about authenticating himself in order to render it carefully and faithfully. The result was much the same as that of his idol, as William Gollings’ work has much the same elegiac quality as Remington’s better creations.

Born in the Territory of Idaho in 1878, William Gollings’ early years were spent in the rough-and-tumble mining camp of Pierce City. His parents felt that his education necessitated his departure from Idaho and sent him to live with his aunt in Michigan. Painting from a Mail Order Montgomery Ward paint set, his early pictures gained him entry into the Academy of Fine Arts in Chicago, IL. William Gollings studied there for two years before leaving on a train to Rapid City, South Dakota.

From South Dakota, William Gollings set out on a borrowed horse to roam the open ranges and work odd jobs for money, food and shelter. He learned to brand cattle and drive a stage, as well as engaging in the almost obligatory early western activities of fur trapping and panning for gold. The lifestyle was hard, but he stayed at it for five years before he was accepted back in Chicago on scholarship. William Gollings worked hard at his painting but tired of city life and, in 1909, moved to Sheraton, Wyoming and built a small studio for himself with a skylight. After the construction of his studio William Gollings worked less outdoors, but never completely abandoned the cowboy way of life that had drawn him in the first place.

William Gollings was lucky in that, Remington excluded, he got to meet almost all of his artistic heroes during his lifetime, including Edward Borein, W.H.D. Koerner, Charles M. Russell, Will James, Joe D. Young and, more importantly, J.H. Sharp. It was Sharp that encouraged William Gollings more than anyone else, and also taught him technique in order that he might realize his full potential. William Gollings was an apt pupil and his work continued to develop over the course of his career.

William Gollings died in 1932 at the age of 54 in Sheridan Wyoming. His paintings, collected and treasured all over the American west, bear his signature- his last name followed by a pony track insignia. 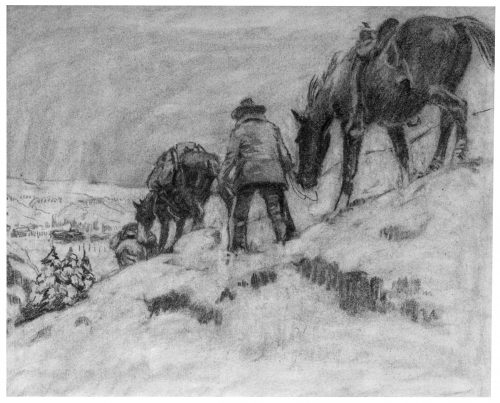