Born in Cincinnati, Ohio, William Frederick Foster at the age of 12 moved to Colorado with his family. However, in 1898 he returned to Cincinnati, and enrolled at the Art Academy where he studied with Joseph Henry Sharp and Frank Duveneck. In 1902 Foster went to New York City, where he painted scenery for theaters, auditoriums, and large department stores. He also studied at the New York School with Robert Henri and William Merritt Chase, and from 1903 to 1931, he worked as an illustrator for magazines such as Life, Cosmopolitan, and the
Saturday Evening Post. During World War I, Foster operated his own ambulance in
France as a member of the American Volunteer Motor Ambulance Corps. Returning to the United States, he resumed his illustration work and moved to Chicago, where in 1919 he taught at the Art Institute of Chicago.

In 1926 Foster won the National Academy of Design’s Clark Prize for the best figure composition painted in the United States by a non-academician, and was elected an Academy Associate the following year. He moved to Los Angeles in 1932, and devoted his energy to painting, exhibiting, and teaching. Foster taught at the Chouinard School of Art and gave private classes in his studio. He also worked on a mural project at the Hearst estate in Wyntoon, California, and was an active member of the California Art Club. 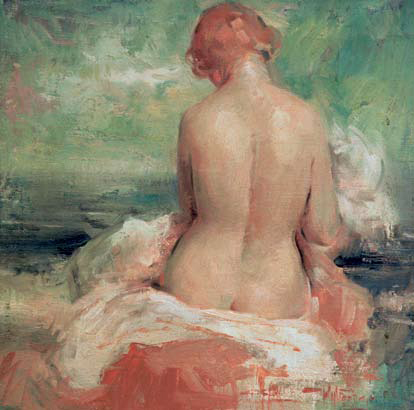