Walead Beshty has long used photography as a tool to explore the social and political conditions of our material culture. More recently, the material conditions of photography itself have spurred his continuing investigations of the gap between the physical world and the image world, and the way this rupture is instrumentalized by ideologies that seek to infiltrate the processes through which we produce meaning.

From his early projects, like those in The Phenomenology of Shopping and Dead Malls, a 2004 exhibition of the artist’s work at P.S.1 Contemporary Art Center in Long Island City, New York, Beshty has frequently experimented with photography’s deadpan recording ability, using the mechanics of its preservation of information about objects and places in specific moments of time—especially subjects with limited native content, like the forlorn precincts of derelict shopping centers— to expose the kinds of projection and fictionalization that effect even the most superficially stable types of “factual” images.

In his more recent projects, the artist has explored other, more politically complex kinds of ruins, most notably in a series of works flowing from a string of visits he made between 2001 and 2006 to the defunct Iraqi Diplomatic Mission in the former East Berlin. The abandoned building—a piece of a sovereign nation then undergoing radical social and political deconstruction, unmoored within the territory of another nation that had ceased to exist—was, Beshty later wrote, “a relic of two bygone regimes, unclaimable by any nation; a physical location marooned between symbolic shifts in global politics and a displaced representation of the turmoil of the nation to which it is abstractly linked.” During his trips to and from Berlin, Beshty found echoes of this zone of radical indeterminacy in the transitional spaces of modern travel—the airport, the customs station, the security checkpoint. It was an unexpected encounter with the last of these that provided the proximate inspiration for the newest phase in Beshty’s ever-evolving practice. Using a batch of film damaged by the airport security X-ray machine, the artist literally added a whole new set of traces of form and meaning to his already layered images, initiating another step in his ongoing examination of what he has called a “core dialectic of his work,” namely, the operative tension between the material and the optical in the photographic artifact.
-JEFFREY KASTNER 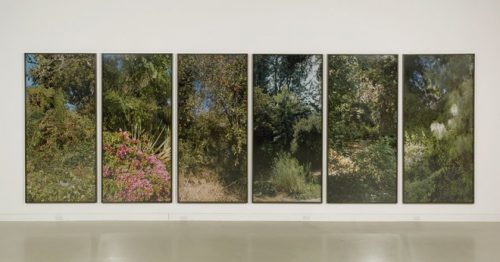