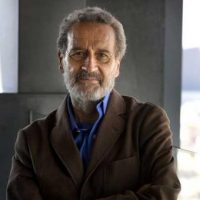 Born in Barcelona, Rojo studied ceramics and sculpture in Spain before the Spanish Civil War in 1949. Under Francisco Franco’s oppressive regime, his family was forced to move to Mexico in search of new opportunities. He resumed his studies in painting and printmaking at La Esmeralda in Mexico City. Rojo featured his artworks at Proteo Gallery, Mexico City, in 1958, at which point his style became less representational and moved towards informalism. In 1960, he became co-founder and art director of Ediciones Era, a Mexican publishing house for poetry, short stories, and articles on history and art. During his tenure, he oversaw editorial projects and created designs for book covers. He was the principal designer for magazines such as Bellas Artes and Artes de México. Rojo received numerous accolades, namely the Premio Nacional de Arte, the Excellency Award for Graphic Design by the International Association of Iconography, and the Emeritus Creator by the Sistema Nacional de Creadores. His works were shown at the Reina Sofia Museum, Madrid,; the Carrillo Gil Art Museum and Jose Luis Cuevas Museum, both in Mexico City; and Klingspor Museum, Offenbach, Germany.