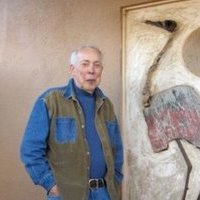 Vernon Witham was born in Eugene, Oregon. Vernon was an accomplished painter with acclaim starting in his late 20’s having showings at the Palace of the Legion of Honor in San Francisco, the De Young Museum and Smithsonian. He moved to Santa Fe in 1988 and continued to paint and draw until 2 weeks before his death.