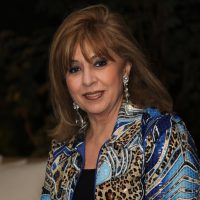 Born in Jaffa, Rizk currently lives and works in Montreal. She studied at the American University in Beirut, Sorbonne University in Paris and Faherlnissa Zeid Royal Institute of Fine Arts in Amman Jordan where she studied art. At Dawson College in Montreal, she studied sculpture, printmaking and graphic design. Rizks art is the creation of an inner world to penetrate the mysteries of the universe. Her paintings concentrated mainly on geometric abstractions are a necessity of capturing and expressing a vision of cosmic forces.

Her first exhibition Galerie Katia Granoff Place Beauvau in Paris 1979 was met with praise from H M the late king Hussein of Jordan as the first Jordanian artist to exhibit in Paris, by her master Fahrelnissa Zeid , Katia Granoff and by the French critics. Since, she had 12 solo exhibitions between France, Jordan, Italy, the United Arab Emirates and Canada. Participated in over 50 group exhibitions in France, Jordan, Japan, Switzerland, Italy, Canada, Roumania, Tunisia and the United States of America.

She is the recipient of many awards and distinctions in France, Japan, Italy, Roumania and Canada. Oscar with gold medal at the world biennale of Modern Art Lyon France, Medal of the Salon de Paris 3rd International Festival, Osaka Japan, Gold Medal for French Merit and five other gold medals. In 1984 becomes societaire du Salon d’Automne at the Grand Palais in Paris. Reference: L’histoire du Salon d’Automne de 1903 a nos jours 1993.

“Art is a Universal language, it is the glorification of the human spirit. As an artist I trace this magic sign of human existence by telling a story with my brush and color and unifying them on a white canvas. Behind these forms, colors, lines and what unifies them, is my own way of singing the melody of the world “. 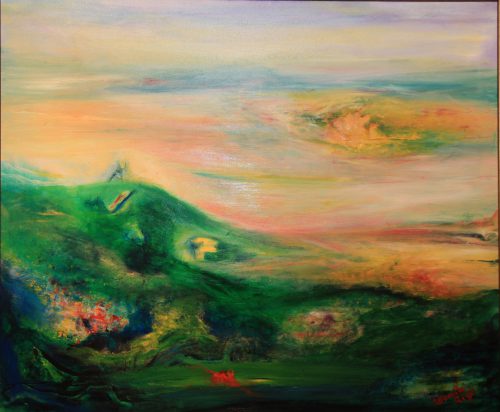 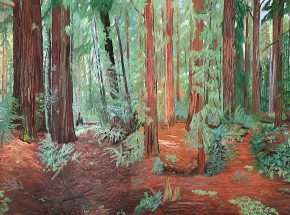