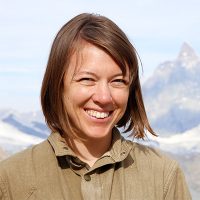 Tonje Bøe Birkeland constructs characters through photography, text, and objects. Inspired by women explorers, her female figures balance on the border between fiction and reality; imagining what could have been. In her series and monograph, The Characters, Birkeland gives women a position within the landscape while exploring the authenticity of history. On expeditions, female explorers are staged in terra incognita (unknown land) per conventional representation. While the romantic motives of the male wanderer have been well-documented, in Birkeland’s project, the characters are female. The heroine moves in pristine, known territory: in front of her looms grand exploration; behind her, history is formed.

Birkeland holds a Bachelor of Arts Degree in Photography in 2009 and a Master of Fine Arts Degree from the Bergen Academy of Art & Design in 2012. The same year, she was awarded the Hasselblad Foundation’s Victor Fellowship for the work Tuva Tengel (1901-1985) Letters from Mongolia, which was exhibited in New Nordic Photography at the Hasselblad Center, Gothenburg. A recipient of the prestigious International Studio & Curatorial Program residency in New York, Birkeland has exhibited in Sweden, Denmark, United States, and Great Britain. Her work can be found in many prestigious collections, including The National Public Art Council Sweden, Nya Karolinska, Solna, Sweden; Hasselblad Foundation, Gothenburg, Germany; and Preus Museum, Horten, Norway. The Characters is also featured in various publications, including Norwegian Journal of Photography, Fritt Ord, Oslo (2017) and Girl on Girl – Art & Photography in the Age of the Female Gaze, by Charlotte Jansen, Laurence King Publishing, London (2017).