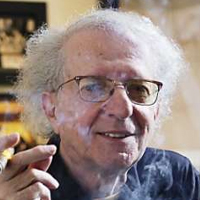 Tom Marioni was born in Cincinnati, Ohio, attended the Cincinnati Art Academy, and in 1959 moved to San Francisco, where he still lives. His first sound work, One Second Sculpture, 1969, was celebrated in the 2005 Lyon Biennial as presaging the work of many artists today who use sound and duration as subjects. His first museum show was in 1970 at the Oakland Museum of California. Titled “The Act of Drinking Beer with Friends is the Highest Form of Art,” it was an early example of social art as a sculpture action. Over the years, Marioni was invited to repeat the work in various contexts around the world.

In 1970 Marioni founded the Museum of Conceptual Art (MOCA), which he described at the time as “a large-scale social work of art.” Until the museum closed in 1984, he organized many groundbreaking shows, including “Sound Sculpture As” in 1970. MOCA has entered history as one of the first alternative art spaces. Marioni had one-person shows in several significant venues for early conceptual art, among them the Richard Demarco Gallery in Edinburgh in 1972 and Gallery Foksal in Warsaw in 1975. In 1977 he had a solo show, “The Sound of Flight,” at the de Young Museum in San Francisco.

He has done installation/performance works at the Whitechapel Gallery in London (1972), the Institute of Contemporary Art in London (1973), the Centre Georges Pompidou in Paris (1980), and the Folkwang Museum in Essen, Germany (1982), among other museums. He has produced sound works for radio stations KPFA in Berkeley and WDR in Cologne, Germany. In 1996 he organized The Art Orchestra and the group performed at the Legion of Honor Museum in San Francisco.

Marioni was included in “For Eyes and Ears” (1980) at the Academy of Fine Arts in Berlin, “Live to Air” (1982) at the Tate Gallery in London, and “From Sound to Image” (1985) at the Stuttgart Staatsgalerie in Germany. His work was shown in “Out of Actions: Between Performance and the Object” (1998) at the Museum of Contemporary Art in Los Angeles, and “The Third Mind: American Artists Contemplate Asia,” (2009) at the Guggenheim Museum in New York City.

Drawing is central to Marioni’s art, and in 1999 he had a drawing retrospective, with a catalog, at the Mills College Art Museum in Oakland. In 2006 the Contemporary Art Center in Cincinnati presented a survey of his work and published a catalog. Marioni is the author of Beer, Art and Philosophy, 2003, a memoir, also Writings on Art 1969-1999, and Fabliaux Tom Marioni Fairy Tales. He was editor/designer of VISION magazine published by Crown Point Press, 1975-1981. Issues were titled “California,” “Eastern Europe,” “New York City,” “Word Of Mouth,” (phonograph records) and “Artist’s Photographs,” and published prints, since 1974.

Tom Marioni received a Guggenheim Fellowship in 1981 and three grants from the National Endowment for the Arts during the 1970s. His work is in the collections of the San Francisco Museum of Modern Art, the Museum of Modern Art in New York, the Stadtische Kunsthalle in Mannheim, Germany, the Pompidou Center in Paris, and other museums. He is represented by Gallery Paule Anglim in San Francisco, the Margarete Roeder Gallery in New York, and the Carl Solway Gallery in Cincinnati.