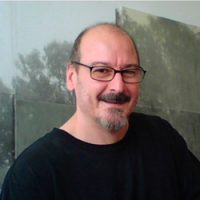 Born in 1957, Tom Brydelsky lives in New York. His mixed-media encaustic paintings are an investigation into the nature of perception, memory and the living environment. They have appeared in galleries and art fairs throughout the U.S. and Europe.

He has had one-person shows at Cheryl Hazan Gallery, New York, NY and Gruen Galleries, Chicago, IL. in addition to various non-profit spaces. The painting, Sojourn, appeared in the November 2009 issue of Architectural Digest and his work was featured on the television special Fashioning a Home with Clinton Kelly. Recently he was the artist-in-residence in the Voices and Visions program at the Heckscher Museum of Art in Huntington, Long Island.

Of his work, Brydelsky says, “Initially, using a series of photographs I have taken, I manipulate a picture digitally to re-capture the feeling that a particular environment or object evoked. Once encountered, the resulting image is printed using archival inks and paper, mounted onto a wood panel and becomes the base for an encaustic painting. The translucent quality of encaustic directly applied to the surface augments whatever atmospheric condition the image holds. In addition, it is a media that allows for a broad range of surface textures, and by its very nature, speaks of the fragility of life and memory.”

He studied painting at the Art Student’s League and holds a BA from Empire State College in New York. He has extensive teaching experience and was the Studio Art Lab Coordinator at the Guggenheim Museum in New York for many years. He has taught workshops to adults and children at Bank Street College of Education, the Queens Museum of Art, NY and in conjunction with his solo exhibitions in Fayetteville, AK and Asheville. NC.

His work is in public and private collections in the United States and Europe. 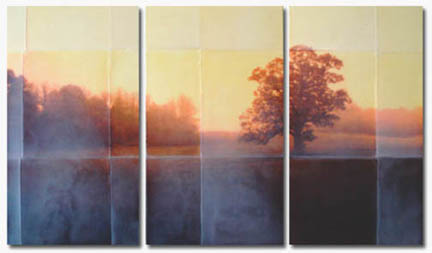