Theodore Wendel is one of the most respected American impressionists and major museums and collectors are eager to purchase exquisitely rendered works like View from the Artist’s Farmhouse, Ipswich, MA that display Wendel’s finest period of impressionism. He is considered the “most French” of American painters along with Theodore Robinson and Childe Hassam.

Wendel was born in Midway, Ohio, and lived in Newport (RI), Boston (1889-1898) and Ipswich (MA, 1898-). As a boy, he joined a circus as an acrobat. He studied with Thomas Noble at the McMicken School of Art at the University of Cincinnati, where he met and became a life long friend of Joseph DeCamp. He and DeCamp traveled to Munich, Germany, in 1878, to study with Frank Duveneck at the Munich Academy and they became known as “The Duveneck Boys.” Duveneck, Chase, Whistler, Twachtman and Wendel painted landscapes and figural paintings in Polling, Florence, and Venice from 1878-1880. Most of his paintings from this period disappeared and are very rare. He sailed for Newport, Rhode Island in 1882 and lived briefly in New York. In 1883, he exhibited in Cincinnati with Twachtman, DeCamp and Potthast and in that year Wendel and Louis Ritter moved to Boston (soon followed by DeCamp) and opened a studio.

From 1886-1888, Wendel studied in Paris at the Académie Julian and during the summers of 1887 and 1888 he became a close friend of Claude Monet and painted at Monet’s gardens in Giverny with fellow American Theodore Robinson, Willard Metcalf and John Twachtman. These American immersed themselves in the study of the heightened colors and intense light of the more modern impressionist style of Monet. Wendel, Breck and Metcalf returned to Boston and in 1889, both Wendel and Metcalf held important exhibitions there.

Wendel married Philena Stone in 1897 and they moved to a large farm in Ipswich, Massachusetts inherited from her family. Although the artist retained a Harcourt studio in Boston (where many of his paintings burned in the 1904 fire), his heart was at the Ipswich farm, which he worked himself. In 1917 a mysterious and protracted illness curtailed Wendel’s outstanding career. 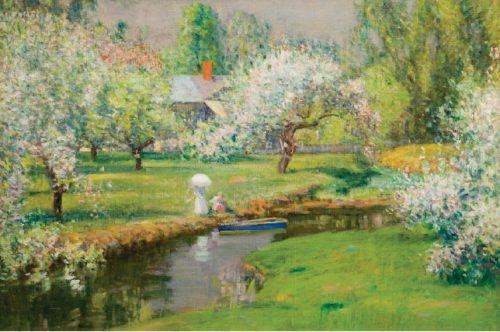 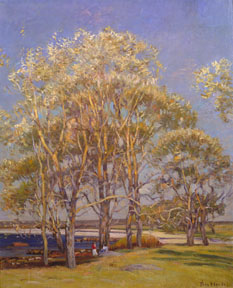