Sylvester Phelps Hodgdon studied with Benjamin Champney in Boston and later with Samuel Rouse in New York City. In the early 1850s he worked as a lithographer for L. H. Bradford in Boston, during which time he executed views of the Flume and the Old Man of the Mountain.

For thirty years he kept a studio in the Tremont Studio Building and he lived at 202 Savin Hill Avenue, Boston. Though known primarily for his landscapes, Hodgdon also taught life classes at both the Boston Museum of Fine Arts and the Boston Art Club. He exhibited at the Boston Art Club, the National Academy of Design, and the Brooklyn Art Association. He exhibited Echo Lake, Franconia (1858); Sunset after a Shower, White Mountains (1863); and The Waterfall (1865) at the Boston Athenaeum.
Hodgdon was known to have painted throughout New Hampshire’s White Mountains. In August 1890 he stayed at Wentworth Hall in Jackson, NH (where he was artist-in-residence?). His White Mountain paintings include Echo Lake, Franconia 1886 (Malden Public Library); Mount Washington from the South (Denver Art Museum); and White Mountains in September, North Conway 1853 (University of Michigan Museum of Art). 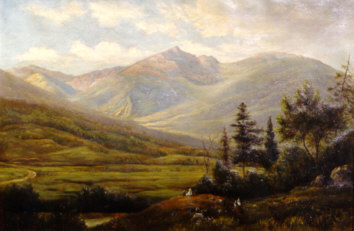