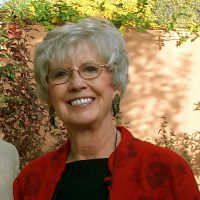 I was born in Webster City, Iowa and lived there until I was 21, having completed 3 years in Applied Art at Iowa State. The next year I moved to an army base near Tacoma, Wa., with my new husband, then on to Minneapolis and back to Iowa in 1958 where I lived until 1975.

In late 1963, after having tried everything from needlework to hat making and not finding anything truly challenging creatively, I decided to take painting lessons. In a very short time the teacher decided we should both go to the Des Moines Art Center “Artists in Residence” program. I was totally overwhelmed for a while, but it was a good way to get started. In the fall of 1972 I went back to Iowa State as a “mature” student. I had several painting classes and gained a bit of self-confidence and learned a lot.

In 1975 I made some major changes in my life including a move to Denver and I finally did finish my degree. I graduated from Colorado Womens College with a BFA in fine art. Over the next several years I took various workshops and started showing in some local galleries. I had already been painting in oil and some watercolor but once I discovered acrylic I know I had found my medium. I started entering juried shows both regionally and nationally to build a resume.

In 1980 I moved into the red rock area just south of Denver and after a couple years, being surrounded by those rocks and their amazing energy, I found my focus shifting from trees to rocks.

I’ve been a serious artist for over 40 years, and my life as a wife, mother and artist has unfolded in ways that has deeply influenced my creative work. The deaths of two of my three children caused me to reflect on the meaning of my existence-and theirs-and what living held as a purpose. I adopted contemplation as a means to find answers to countless questions I had of the universe. These reflections led me on a spiritual quest that directed me to a personal path of discovery. As my search progressed, many guides and teachers came into my life. Each of them brought some new and unique point of view that helped me on my journey.

I began to realize painting would assist my spiritual journey and my spiritual journey would awaken a new awareness and meaning in my painting. I plunged into my painting with a new energy and things began to change in my work, my learning and my life. Colors and shapes and the way I worked with the paint started moving in new and exciting ways. Texture became a focus and awareness of edges an adventure. I realized that a small change in either my paintings or my life would change everything. It was interesting to discover how many spiritual principles applied to the process of painting, and I saw how much one helped me open to the other. The willingness to change an area that was almost right, but yet wasn’t quite working became one of my goals. Letting go and being willing to try, even thought it might not work, brought me more lessons.

In 1997 we moved to Evergreen, Co., a small mountain community just west of Denver. When the altitude became a health problem we moved in 2005 to Albuquerque, NM. Since I was in galleries in Santa Fe, Taos, and Albuquerque, that has worked out well. Over the years I have been in over 30 galleries. Over the years I have been involved in numerous one woman and small group shows in Iowa, Colorado, New Mexico and California.

One of my latest series of work is a search for “spirit”, the innate yearning for understanding the “great mystery”. I use the rock form to represent basic primal manifested energy within our world. To me, these forms embody the experiences we all have in the unfolding of our lives. We create secrets-deep crevasses-or we open our consciousness to become more of who we truly are, layer upon layer.
Each painting is meant to be a small universe that represents the microcosm within the macrocosm—the emergence of form, the syntheses of the concrete and spirit.

These paintings are journeys of my heart. My intention is for the paintings to become metaphors that reveal the truth we have within us but have forgotten. As I continued to open more to my inner self, my work shifted again in its focus. I started adding heavy texture and simplifying the composition, using metaphor for meaning. A few years ago I wrote a book called “Painting the Mystery” which details the search.

In my newest work I have again added more landscape elements at times including my first love, trees, many have a sense of peace or a deep distance view. I hope they communicate an invitation to enter from whatever place one is to however deeply one chooses to go. The content is an offering, given with an open and joyful heart.

My collectors include hotels, banks, restaurants, many professional and business offices and in private collections across the country. 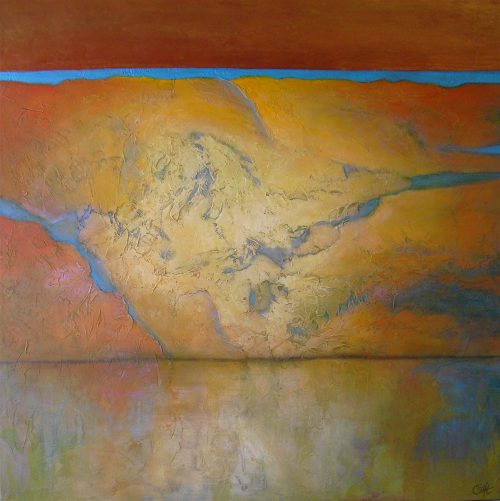 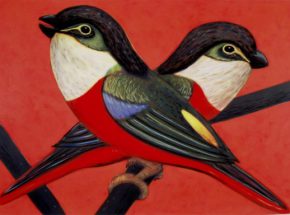