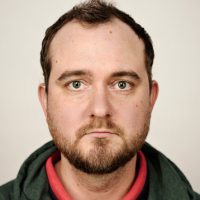 Scott Olson’s painting practice is rooted in a deep fascination with painting’s materials, tools, and history, but also in performance, music, and improvisation. Through a process involving layering and removing through the use of glazes, masking, and scraping, the composition becomes an index of his maneuvers; a deliberate record of his process to which the viewer becomes witness.

Olson is particularly interested in the art of tool-making and will often forgo the use of traditional brushes and palettes, opting instead for unconventional tools that he collects or constructs for their unique mark-making potential. His involvement in the production and transformation of his materials comes out of his interest in science and alchemy and the questions these disciplines raise about the “literalness” of
a work and the power of such material properties to dictate the final outcome of a painting. His paintings work against final, realized forms and instead suggest a state of openness and evolution, where materials and forms seem to unfold, perform and dissolve before the viewer’s eyes. Utilizing a number of different supports including canvas or linen, fiberboard and marble dust panel, Olson plays with the notion of surface
and framing as constructs in his work, at times, employing handmade frames and thick borders of unpainted surface around a central painted field that act as both a physical edge to the painting and call attention to its nature as both an image and an object.

Describing his work, Roberta Smith states “the intently improvised geometries of Olson… evoke manuscript illumination filtered through Constructivism and other abstract styles. His colors have… a retroactive subtlety; frequently they are translucent, to reveal the complex decisions and elaborate processes packed into each work. The forms are laid on in thin glazes with fine, varied textures, creating echo chambers of form that suggest faceted jewels, flattened out.”

Olson has had several solo exhibitions in New York, Los Angeles, Berlin and Stockholm. In 2017, the Cleveland Museum of Art organized a solo exhibition of his work, presented at the Transformer Station, Cleveland. Olson has been included in numerous group exhibitions including Realization is Better
than Anticipation, MOCA Cleveland (2013) and Painter Painter at Walker Art Center, Minneapolis (2013). 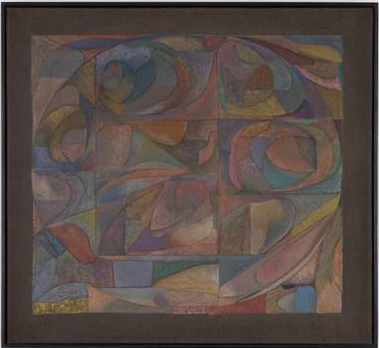 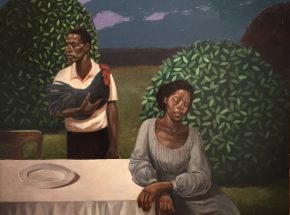