Sara Newberg King has been quilting since 1978. At that time she was an Occupational Therapist whose 3 year old daughter just died. In her grief, she decided she needed some therapy work to do with her hands. She went to the local craft store and purchased a cross stitch quilt kit and thus her passion for quilting began. She says that Erica, the name of her daughter, has led her to stretch her creativity and talents and opened up unknown worlds to her.

In 2004 she became a grandmother again to grandchildren numbers 7 and 8. Because they all lived in Minnesota, she decided that her heart was there. So she and Ron moved back to Minnesota where they spend all summer playing with their now 9 grandchildren ages 1 to 11.

Sara now spends her time enjoying her grandchildren, creating fiber art, lecturing on her passions of fiber and travel, and visiting the world to meet quilters throughout the world.

Sara and her husband Ron began leading quilters on tours in 1994 with a tour to Italy. Since then they have gathered quilters to visit the world each year. In 2008 they went to Greece and had an exceptional tour with the best program director in the world!
They will not be returning to Russia again to see the Patchwork Mosaic of Russia quilt show in 2011 as they had thought. However, Sara is open to destinations such as India to visit and see their cottons. Because the Pacific Northwest Quilt Artists show has changed dates, it has also been put out into the future. Bookmark www.paducahquilts.com so that you can return to find out about future tours. 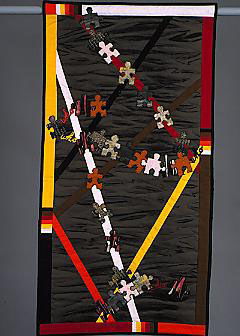