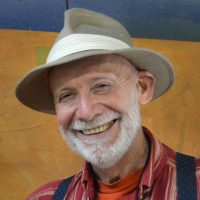 Minoring in truancy as a kid, the artist frequently hopped the bus from his small New Jersey bedroom community to wander the streets and haunt the museums and galleries of Manhattan. Dropping out at the end of his first year in pre-med at the University of Chicago he spent the next nine years in and out of art schools. Occasionally living in the abandon houses and derelict storefronts of Chicago’s working class neighborhoods, he supported himself periodically as a merchant seaman and small time gambler.

Aboard an Asian bound freighter on a work break from Yale graduate school, injuries from an accident in heavy seas ended his sailing days. Following graduation he moved to New York and found work, initially as a cabinetmaker at the Museum of Modern Art – then for almost a decade as an adjunct professor at Queens College and Fordham University.

Offered a Fulbright fellowship to Korea he spent two years as a visiting artist there – becoming the first American to be honored with a solo exhibition at the National Museum of Modern Art in Seoul. Upon returning home he reentered the museum world, becoming the principal designer of more than 100 fine arts exhibitions internationally. His work and intense curiosity about other cultures have at times found him exploring Europe, Africa, India and the Far East.

His paintings, with their powerful and unique color voice, have attracted increasing critical attention and been featured in more than a dozen juried and invitational exhibitions over the last decade. The artist and his wife live on the outskirts of Washington, D.C. where a converted stable serves as his studio.

Philosopher John Dewey described Art as the ‘experience’ that takes place
between the work of art and the viewer.

Neuroscientists studying how the human brain constructs ‘reality’ have determined that what we perceive as ‘reality’ is actually an amalgam of roughly 3% of the information our senses take in,
combined with bits and fragments of memory.
It is a process called ‘Confabulation’.

Some years ago while working as a merchant seaman I discovered that my orientation to the world of fixed horizons was challenged, (especially at night or when below decks), by complex signals relating to balance and counter-balance. These feelings started in my feet, moved up my legs to my torso and neck, and finally to my inner ear, where the ebb and flow of my own miniature sea triggered a sense of reality that contravened what my eyes seemed to tell me.

As an artist I’m interested in the intersection where perception and memory shape (or appear to shape) reality. For a work of art to address that ambiguity, I believe it must reach beyond its own boundaries to touch both its environment and those inhabiting it. I believe this confluence of visual and psychological phenomena has the potential to free us, albeit temporarily, from some of the fixed assumptions we hold about the tangible world.

To sustain this disequilibrium, a work of art must continually raise more questions than it answer. Then as our attention shifts and new bits and fragments from our own memories replace older ones, we are unavoidably obliged to ‘reinvent’ what we think we see. And, as the process continues to cycle, we may find ourselves abandoning certainty all together.

Once we acknowledge our role in the experience and the mutability that this interactivity implies, we find ourselves in a game of chance with all its attendant risks and rewards – a game not unlike the creative process itself in which one overriding quality is risk-taking. 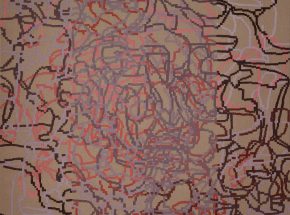