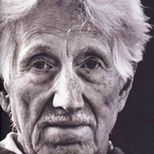 Rolph Scarlett was born in Guelph, Ontario. His long life as an artist began in his teens as a jewelry designer and fabricator. At the age of fourteen he began to design jewelry professionally, a craft which he continued off and on for the rest of his life.

His desire to learn more about art took him to New York in 1908, when American artists were just beginning to experience strong influences from major modern European artists of the day such as Cezanne and Picasso.

Throughout his long career he produced oil paintings, many works on paper, unique sculptured jewelry, modernist style industrial and furniture designs. Currently there are over 800 of his designs at the Montreal Museum of Fine Arts Design Collection.

In 1928 he moved to Hollywood, California where he became a very successful stage and set designer. In the mid-1930s he met the director of the Museum of Non-objective Art in New York ( Hilla Rebay). He became her close associate and advisor in organizing and running the museum. He was Chief lecturer at the museum (1939 -1946) teaching the new modernism and abstraction to the new generation of artists in the New York art community. Hilla Rebay would introduce him as “Rolph Scarlett, my great find”. So considerable was her enthusiasm for Scarlett, that she and Solomon Guggenheim bought over sixty of his paintings and monotypes for the museum. After Kandinsky and Bauer, there was more of Scarlett’s work in the collection than any other artists.

He participated in many of the museum exhibitions and galleries and was regularly exhibiting his work in Los Angeles, the San Francisco Art Museum, the Art Institute in Chicago, the Modern Age Gallery in N.Y., the Metropolitan Museum, the Whitney Museum and the Museum of Modern Art. He studied for a time at the Art Student League with William Merrit Chase, John Sloan and Georges Luks.

In 1951, called by a curator from the Whitney Museum asking if he wanted to have a painting in their annual exhibition and if they could come to his studio to make a selection. The painting the curator selected had been done by puncturing holes in the bottoms of paint cans and letting the paint drip onto the canvas. He selected the drip painting over the other paintings which were in Scarlett’s more usual geometric style. Scarlett labeled these paintings “Lyrical,” today these would be labeled as Abstract Expressionist.

In the early 1960s Scarlett moved to Woodstock, New York, where he would remain until the end of his life. By this time he had returned to geometric abstraction and concentrating on the creation of jewelry. Since his death, many galleries have given him numerous shows. There have been approximately 14 one-man shows of his work, mostly in New York City.

Rolph Scarlett’s artistic career embraced over 75 years. His greatest works were the sculptured jewelry, his Lyrical Figurative Abstractions and Geometric paintings. Also notable are the modernist industrial designs and the stage designs of the 1920’s.