Dayton, Ohio native Robert Whitmore studied at the Art Institute of Chicago and taught at Hull House in Chicago from 1912 to 1917. He continued his art education back in Ohio at the Cincinnati Art Academy in 1919. That same year he painted the post-impressionist work, Licking Valley. In the summers of 1920 through 1923 he traveled throughout New England in his Model T camper, painting as he went, working in his Dayton studio and teaching at the Dayton Art Institute during the winters. In 1924 he moved to Yellow Springs, Ohio, where he began teaching at Antioch College. 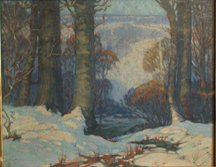