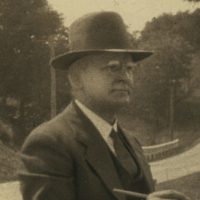 Robert Emmett Owen was a successful artist best known for his Impressionist views of rural landscapes. His color-filled paintings capture the moods and seasonal splendor of the New England countryside.

Owen began his art training at the Drury Academy in his home town of North Adams, Massachusetts. In 1897, while supporting himself by working at a local retail establishment, he contributed pen and ink drawings to Life Magazine, initiating what would be a long and productive career as an illustrator. The next year, he received a scholarship to study at the Eric Pape School of Art in Boston.

After three years of training in Boston, Owen achieved further success from his commercial work, selling drawings to the Boston Globe, National Magazine, and Brown Brook Magazine. Later, his work would appear in Scribners Magazine, Harper’s Monthly, and other publications.

n 1901, Owen moved to New York and continued his training at the Art Students League, the Chase School, and the National Academy of Design. Among his instructors were Frederick Mulhaupt and Leonard Ochtman. In New York, Owen became aware of the art of leading American Impressionists and began to create works that reflected the influence in particular of Willard Metcalf, J. Alden Weir, and Childe Hassam.

After nine years in New York, Owen moved to Bagnall, Connecticut, near Stamford, in order to paint landscape subjects directly. In the period that followed, he exhibited at the Greenwich Society of Artists in 1912, the National Academy of Design in 1912 and 1913, and the Connecticut Academy of Fine Arts in 1915 (to which he was elected a member). His work was well liked by critics and the public, and he received a number of important commissions from private clients for both murals and oils, including a series of twenty paintings ordered in 1919 by Temple Gwathmey, the former president of the New York Stock Exchange. In 1923, he created a series of images of Fort Ticonderoga for Stephen H.P. Pell. Eight of these works were reproduced as full-page illustrations in Harper’s Magazine. Later he received commissions from Edward Stettinus, a former Secretary of State, and Percy Rockefeller.

Owen returned to New York in 1920 and opened a gallery on Madison Avenue, called the Robert Emmett Owen New England Landscape Gallery, where he exhibited and sold his own work. The gallery, which moved in the 1930s to West 57th Street, was successful for twenty-one years. When the United States entered World War II in 1941, Owen closed the gallery and moved to New Rochelle, New York, where he became the artist in residence at the Thomas Paine Memorial Museum.

From the beginning of his career, Owen demonstrated a capacity for tight and precise draftsmanship, which enabled him to find success as an illustrator. Later, when he became influenced by Impressionism, he adopted a vivid palette and painted with loose, vigorous strokes, while continuing to portray forms with a firm sense of reality. His images capture the varying moods of the New England countryside and portray architectural and landscape forms with a truthfulness that has been likened to the poetry of Robert Frost.

In addition to the National Academy of Design, the Greenwich Society of Artists, and the Connecticut Academy of the Fine Arts, Owen showed his work at the Anderson Galleries, New York; the Ainslee Gallery, New York; the Corcoran Gallery of Art, Washington, D.C.; the Pennsylvania Academy of the Fine Arts, Philadelphia; the Art Institute of Chicago; Dartmouth College, Hanover, New Hampshire; Mount Holyoke College, South Hadley, Massachusetts; the Williston Academy, Massachusetts; the Albany Institute of History and Art, New York; the Orlando Public Library, Florida; and the Allied Artists of America, New York. His work may be found in the collections of the Frick Art Museum, New York; the Bruce Museum, Greenwich, Connecticut; and the Greenwich Public Library. 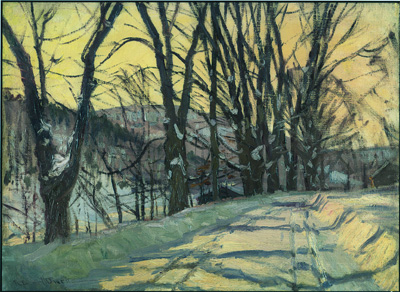