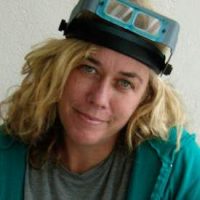 Rita McBride lives and works in New York and Cologne. In addition to numerous solo exhibitions in the United States, McBride has exhibited extensively in Europe including: Institut d’Art Contemporain in Villeurbanne, France; Wiener Secession in Vienna; Kunsthalle in Baden-Baden and Witte de With in Rotterdam. She is a recent recipient of the prestigious DAAD residency in Berlin (1999) and a Guggenheim Memorial Foundation Fellowship (2002). McBride was part of an architectural team whose design proposal was short listed along with six other teams to compete for the redesign of the former World Trade Center site in New York. She is a senior sculpture critic at Yale University and professor of sculpture at Kunstakademie Dusseldorf.