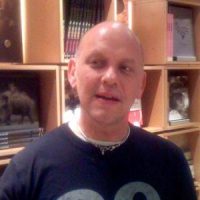 San Francisco-based artist Rex Ray’s vivid, intricate pieces revel in the exuberance of color, line, and form. But beyond their love of design, Ray’s pieces also carry a note of nostalgia. An admirer of Pop Art and contemporary design of the 1960s and 1970s, Ray often references that era of design in his own work. At their core, Ray’s pieces are simply beautiful and appealing. He has said, “Some have criticized my work for being too decorative, but I don’t agree, because I’m interested in having people like them.”

Ray successfully straddles the design and fine arts worlds. He earned his Bachelor of Fine Arts degree from the San Francisco Art Institute in 1988, and has exhibited extensively at museums and galleries across the country. Ray has also created commercial work for Apple and Sony Music, among others.