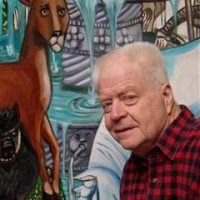 Red Grooms was born in Nashville, Tennessee, during the middle of the Great Depression in 1937. He attended the Art Institute of Chicago, Illinois, and Peabody College in Nashville, Tennessee. He moved to New York City in 1956 to study at the New School for Social Research. In 1957 Grooms participated in a summer session at the Hans Hofmann School of Fine Arts in Provincetown, Massachusetts. During the late 1950s and early 1960s, Grooms made a number of Happenings, including his best known The Burning Building, in1959. Shortly thereafter, he invented sculpto-pictoramas, the mixed-media installations that would become his signature craft. Melding painting and sculpture, these immersive constructions invited interaction from the viewer, and were often populated with colorful, cartoon-like characters from many different walks of life. His two most notable installations, the 1967 City of Chicago and the 1975 Ruckus Manhattan, were done in collaboration with his wife at the time, an artist in her own right, Mimi Gross. Besides painting and sculpture, Grooms is also known for his prolific printmaking. He has experimented with numerous techniques, creating woodblock prints, spray-painted stencils, soft-ground etchings, and elaborate three-dimensional lithograph constructions. Grooms’ work has been exhibited across the United States, Europe, and Japan, and is included in the collections of some thirty-nine museums, including the Art Institute of Chicago, Illinois; the Museum of Modern Art, the Whitney Museum of American Art, and the Metropolitan Museum of Art, all in New York City; Cheekwood Botanical Garden & Museum of Art in Nashville, Tennessee; the Cleveland Museum of Art, Ohio; and the Carnegie Museum of Art, Pittsburg, Pennsylvania. In 2003 Grooms was awarded the Lifetime Achievement Award by the National Academy of Design, New York City. Grooms currently lives and works in New York City. 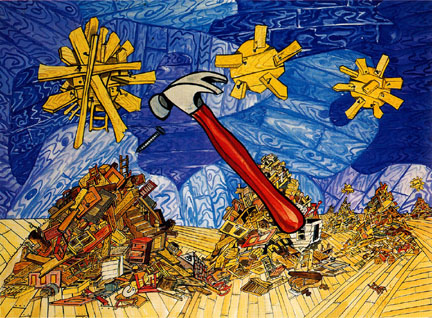