Portrait painter Ralph Eleaser Whiteside Earl is thought to have been born in 1788 in New York City. He was the son of the well-known portrait painter of the Revolutionary Period, Ralph Earl, 1751-1801, who probably taught his son the painter’s art.

Earl’s first-known portrait was painted in 1802, and his 1804 family portrait is in the National Gallery, Washington, D.C. His work became increasingly sophisticated in 1809, it was apparent he had increased his grasp of anatomy and three-dimensional modeling. His progress is credited to his studies in London, England in 1809 with John Trumbull and Benjamin West. The next year, he returned to Norwich, Connecticut, where he lived for four years, before again leaving for England in 1814. While in Norwich, Earl painted portraits, including that of General John Money, who had been his father’s patron.

Earl spent a year in Paris, France, 1814-1815, where he met figure painter John Vanderlyn, and studied the masterworks of the Louvre Museum. Earl returned to the United States, arriving in Savannah, Georgia in December 1815, when he proceeded to travel around the South painting portraits to include in a history painting of the Battle of New Orleans. However, the work was never completed. Earl met General Andrew Jackson, however, whom he would follow to the White House in Washington upon the General’s election as President of the United States, and subsequent two terms, 1829-1837. Earl painted so many portraits (over two dozen) of President Jackson, who became a friend and life-long patron, that he would become known as the “Court Painter,” or “King’s Painter,” terms that no doubt referred, in part, to the power that Jackson exerted through his use of the veto.

Initially, in January 1817, Earl had visited Jackson’s home, The Hermitage, in Nashville, Tennessee, where he painted portraits of the General, his family, and friends. He married Mrs. Jackson’s niece, Jane Caffery, on May 19, 1819, but she died tragically in childbirth in 1820, just a year later. When General Jackson’s wife died in 1828, Earl became the General’s closest companion and lived at The Hermitage. After eight years as President, Jackson and Earl returned to The Hermitage in 1837, where the artist died on September 16, 1838, a little over a year and a half after their return.

Ralph Eleaser Whiteside Earl’s paintings may be found in the collections of the Metropolitan Museum of Art, New York City, which holds his portrait of Mrs. Williams, 1837; the National Gallery of Art, Washington D.C.; and National Portrait Gallery, Washington D.C., where one of his portraits of Andrew Jackson hangs, showing Jackson in military uniform, recalling his early fame as the general who defeated the British at New Orleans during the War of 1812. Earl’s painting of The Ephraim Hubbard Foster Family, c. 1825, interestingly an oil painted on mattress ticking, is in the collection of the Cheekwood Art Museum, Nashville. Many of Earl’s portraits of Andrew Jackson may be found at “The Hermitage” hotel, in Nashville. 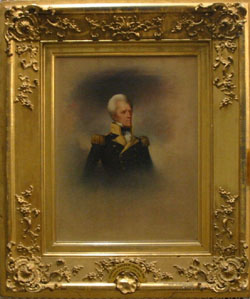