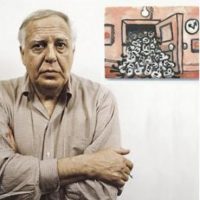 American painter. He moved to Los Angeles with his family in 1919. He began to paint and draw in 1927 and attended the Otis Art Institute for three months (1930). At this stage he based his technique on a close study of the art of Giorgio de Chirico and painters of the Italian Renaissance such as Paolo Uccello, Andrea Mantegna and Piero della Francesca. He was attempting to integrate the modelled architectural space of Renaissance art with the contracted, reassembled space of Cubism, for example in paintings of sinister hooded figures reminiscent of the Ku Klux Klan such as Conspirators (c. 1930; untraced, see Ashton, 1976, p. 10).
In the 1930s Guston became involved with the mural movement and the work of Mexican artists such as Diego Rivera. On his arrival in New York in 1935–6 he joined the group of artists that included Burgoyne Diller and James Brooks (ii) who worked for the Works Progress Administration’s Federal Arts Project (WPA/FAP). Among the murals on which he worked are Maintaining America’s Skills (destr.; see 1982 exh. cat., p. 59) on the façade of the WPA Building at the World’s Fair of 1939, the Queensbridge Housing Project (1940) in New York and the Social Security Building (1942) in Washington, DC. The style of his mural work, particularly the organization of figures in space in the Queensbridge commission, owed much to Uccello, of whose Rout of San Romano he owned large colour reproductions. Another key influence was Picasso, whose major exhibition at MOMA in 1939 was an outstanding event for American painters. In 1940 Guston left the project and from autumn 1941 to 1945 was artist-in-residence at the State University of Iowa in Iowa City, before moving to St Louis, MO, as artist-in-residence at the School of Fine Arts, Washington University, a post that he left in 1947 when he was awarded a Guggenheim Fellowship. He continued to teach (mainly drawing) at New York University and at the Pratt Institute. He was awarded a grant from the Ford Foundation in 1959.
Like many of his contemporaries, Guston spent the years after World War II developing a personal style and vision out of the diverse range of realist and abstract influences that challenged American artists of his era. In the 1940s he constructed a private mythological world in paintings such as Martial Memory (1945; St Louis, MO, A. Mus.) and If this Be Not I (1945; St Louis, MO, Washington U., Gal. A.); in the latter a crowd of children, some masked or with faces partially covered, fill the columned porch of an old dilapidated Midwestern house. It is a night scene, predominantly blue in colour, richly and heavily painted. By 1947–8, when he painted The Tormentors (San Francisco, CA, MOMA), figures have almost disappeared, leaving behind only traces of floorboards, furniture and architecture. In the early 1950s he developed a lyrical abstract style in works such as Dial (1956; New York, Whitney), which towards the end of the decade evolved into single dark images embedded in a morass of grey paint, for example Painter I (1959; Atlanta, GA, High Mus. A.) and New Place (1964; San Francisco, CA, MOMA). His most radical shift came in the late 1960s with works such as Evidence (1970; San Francisco, CA, MOMA), when he confounded the art world with a new figurative style in which blunt cartoon shapes are used to create a personal iconography. Certain images recur in these paintings, such as the soles of shoes (as in Back View, 1977; San Francisco, CA, MOMA) and people’s heads (e.g. Painter in Bed, 1973; London, Saatchi Col.), inhabiting a sort of spare parts world in which the disembodied, separate items have a unique and surrealistic life of their own.
Christopher Brookeman
From Grove Art Online
© 2009 Oxford University Press 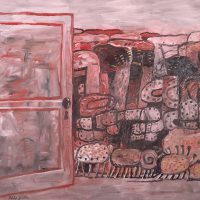