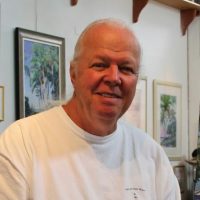 Phil’s formal education began early in life with the influence of his talented artist father and the encouragement of his proud mother. I was born with a brush in my hand. Mom’s never quite gotten over that. He studied at the Ringling School of Art in Sarasota, FL, The Instituto in San Miguel d’Allende, Mexico, The University of Toledo, and The Toledo Museum of Art. He has also studied with such noted artists as Walter Chapman and Don Andrews.

Phil’s watercolors have been juried by his peers into many national and international exhibitions and garnered many awards. More than 50 corporations, internationally, have his work, including Anderson Consulting, Lucient Technologies, Turner Industries (T.I.E.), Sprint, and locally in the collections of McDonald Securities and Premier Properties.

Phil’s list of commissions include several large oils for the Collier County Museum, book illustrations and images for prints to raise funds for a multitude of art and wildlife organizations including Endangered Species Research Foundation, Inc which funds the ARK 2000 project for the PAWS animal rescue organization in Galt, CA.

“I believe it is best for an artist to paint from the heart and not fall into the trappings of what’s popular. Doing work for causes we believe in, often brings controversy, but we are nothing if we don’t stand on the principles which we believe are fair and just. An artist must place more value on why youíre doing a painting and less on how to do it. Often the suggestion of nature’s perfection is more interesting the thing itself. I consider myself a general practitioner of art, enjoying the challenge of different subjects and approaches that interest me.” 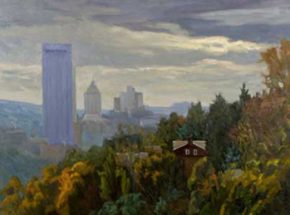