Peter Heinrich Mansbendel was born to Johann Peter and Valeria Siegrist Mansbendel on August 12, 1883, in Basel, Switzerland. At the age of ten, Peter had determined to become a woodcarver and was apprenticed to a local master named Ulrich Huber, with whom he trained for the next six years. There followed a period of study at the Industrial Arts School and then a stint of compulsory service in the Swiss Artillery. Once discharged, Mansbendel set out for London to examine the woodcarvings of the seventeenth-century English master, Grinling Gibbons. He then departed for Paris to complete his education at the Coquier-Roland School of Art.

Mansbendel immigrated to America in 1907. He worked first in Boston and then in New York. During this time he also taught night classes in clay modeling at the Cooper Union. At tea in his studio, he met Clotilde Shipe, whose father, Monroe M. Shipe, was a prominent Austin real estate developer. Mansbendel followed Miss Shipe to Austin, where they were married in 1911. Mansbendel opened a studio in a corner of the former Swedish consulate, and worked out of this studio until ill health overtook him late in 1939.

During the 1920s and 1930s leading architects in Austin, Dallas, Houston, and San Antonio would summon Mansbendel to put finishing touches on their most important projects. His fireplace mantels were especially popular. In addition to architectural detail work, he also made furniture and decorative household items. He frequently interpreted Texas themes- historic persons, places, and events as well as the flora and fauna of his adopted land.

He was always the seeker of the quick, spontaneous effect, always careful to avoid chiseling the life out of an object. Except for portrait carvings, surfaces were never sanded; crisp tool marks were left for texture and effect. Some of his most notable public work includes: the magnificent carved doors of the Spanish Governor’s Palace and of Mission San José at San Antonio, as well as the portrait medallions of former University of Texas presidents which are located in the Texas Union on the University of Texas campus in Austin. 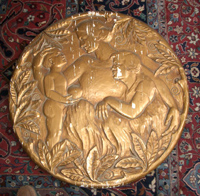 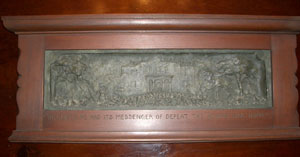 Peter Mansbendel, The Alamo, Plaster; faux bronze relief in a carved wood frame bearing the inscription: Thermopylae had its messenger of defeat, the Alamo had none., 11 1/2 x 28 1/2 in. (29.2 x 72.4 cm), Courtesy of John Miller Mayfield, Austin, Texas