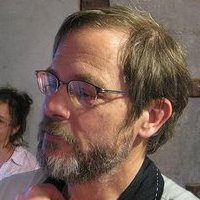 Peter Acheson was born in Washington, DC in 1954 and received his BFA from Yale in 1976. An early member of the Williamsburg art scene of the 1980’s, Acheson relocated to upstate New York where he has worked since the 90’s. Acheson utilizes an array of found materials found around his upstate studio including animal bones and petrified wood alongside acrylic and oil on canvas and wooden panels. Painting with a vocabulary of symbols and art history references, Acheson’s works are raw and roughly layered, often a result of painting on a support for multiple years. Acheson makes many homage paintings to his artistic forebearers, including Eva Hesse, Blinky Palermo and Raoul DeKeyser. These works act as reimaginings of art history or a fragmented dose of ad hoc poetry. His intimate paintings can be seen as resisting the oversized expressions of the first and second generation of AbEx painters that preceded him.