Pegge Hopper was born in Oakland, California, and studied at the Art Center College of Design in Pasadena, California. Her first job was with Raymond Loewy Associates in New York, designing murals for department stores. Next, she spent a year traveling through Europe, settling in Milan, Italy, where she worked for two years at La Rinascente designing posters and graphics. She feels that the experience gained in Europe has been a major influence on her work.

Hopper moved to Hawaii in 1963 and became art director for an advertising agency. In 1970 she began to paint and print her distinctive images of island women. Pegge has had one-person shows in Chicago, Illinois; Los Angeles,California; Seattle, Washington; and in Hawaii at the Contemporary Arts Center. Her gallery, located in the Chinatown section of Honolulu, opened in March 1983.

Hopper’s work is represented in many private and public collections including the permanent collections of the Hawaii State Foundation on Culture and the Arts, The Contemporary Arts Center in Hawaii, the Bishop Museum in Honolulu, the Honolulu International Airport, and the Pacific Club. 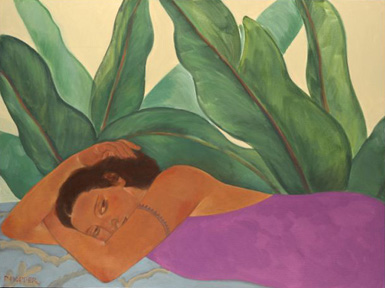