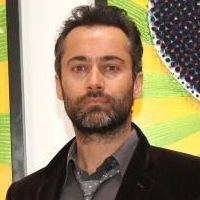 Born and raised in California, Los Angeles based artist Paul Rusconi investigates the portrait with his own photo-based images as well as found or sourced images from popular culture. His work is a digital screening process often combined with nail polish, oil paint, engine enamel and monochromatic photography. The work is layered and framed. The shadow image on the monochromatic photographic is a simple projection through the Plexiglas. There is no image on the actual photograph until one is projected on it by the digital screen. His own photography is used for images that create a grey scale from blue, magenta, yellow and black. Up close all that is evident are colorful dots – and from about 12 feet away – those dots turn into a grey scale or what looks to be a black and white image. This notion came from the observation that a grey-scale could be created from color and therefore such a grey-scale could be broken down into color. The subjects have included artists, musicians, politicians and currently with his fascination of pop-culture and its huge and wide-reaching skate sub-culture Rusconi focuses his current group of portraits on today’s 14 most influential skateboarders in the world.

Untitled (No Way Out) features an image of Tom Cruise and wife Katie Holmes from a magazine cover. The solid background reflects the shadow of the silkscreen. Untitled (Tyra) is a contemporary glamour portrait featuring a vignette of model Tyra Banks. 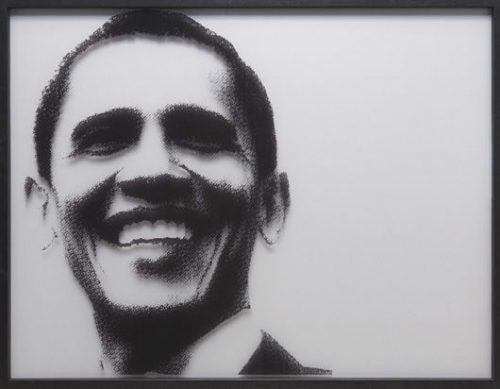