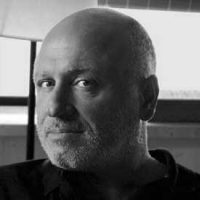 Patrick Fenech is a practising artist and photographer and works mainly from his studio in Senglea, an old fortified city in the Grand Harbour of Malta. He is a visiting lecturer of photography at the Faculty of Art Education at the University of Malta and is an active member of ‘Start’, a contemporary art group.

Fenech started to take pictures which reflected his search for artistic expression. His early works, the majority of them in black and white, are mainly based on a social documentary of the Maltese Islands in the early 80s. His enthusiasm for photography was fueled further by the visit of Mr Petr Tausk from the photography department of the Faculty of Arts at University of Prague who saw Fenech’s early works and acquired a few prints for his own collection. Petr Tausk published some important books on 20th century photography and introduced Fenech to Sue Davis at the time director of the Photographers Gallery in London. Fenech soon realized the potential of photography in artistic practice and started to produce works such as the ‘Latent Aggression’ series and ‘Cradles of Elegance’.

In 1984 Fenech was awarded a scholarship by the Istituto Italiano di Cultura to study photography in Italy and during his four year stay, produced a series of works which mainly portrayed time and traces of memory called “Via delle Cento Stelle, 13” series. He was official photographer for ‘Musicus Concertus’ of Florence and photographed various personalities such as Lorin Mazel, Barbara Hendrix and Alirio Diaz. In Milan, the Maltese opera singer Miriam Gauci introduced him to the back stage scene of La Scala.

After completing his studies in Italy, Fenech moved to London for a while where he practised printing at Camberwell School of Art and then back to Malta were he set up his own studio of photography and design servicing clients in the media industry. He then moved on to the publishing industry were he was engaged as art director on several art and cultural publications. His involvement in photography has taken his work around the globe with group and individual exhibitions. He has conducted a series of photography workshops and curated his first photography exhibition ‘Pictures in My Mind’ as part of the EU campaign for the ‘Year of Intercultural Dialogue’. He was invited by the committee of the Malta Arts Festival to curate the visual art exhibition for the Arts Festival in 2009. In 2010 he was awarded top funding by the MCCA to curate the first Photography Festival in Malta.

For the past three decades, Patrick Fenech has used his camera for what has been called absorptive scrutiny. He has simultaneously looked at, around and through his subjects to compose a fascinating and dizzying tapestry of composite and montage photography. Although his work is mainly photography based, Fenech also produces sculpture, video and installations.

His works can be found in state, private and public collections such as the National Portrait Gallery in Washington D.C., The Amercian Embassy and The French Embassy in Malta, Heritage Malta Fine Arts collection, Malta International Airport, The Farsons Cisk plc collection, Middle Sea Insurance plc, Citadel Insurance, Atlas Insurance plc and others. A number of his works have been published in contemporary art books and international magazines such as Studio International and Lens Culture.