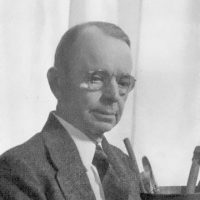 Oscar (O. E.) Berninghaus was one of the founding members of the Taos Society of Artists, along with Ernest L. Blumenschein (1874-1960), E. Irving Couse (1866-1936), W. Herbert Dunton (1878-1936), Bert Greer Phillips (1868-1956), and Joseph Henry Sharp (1859-1953). In 1915, when the Society was formally established, there were no galleries in Taos, and the artists’ exhibitions were an instant success. In contrast with his contemporaries in New Mexico and throughout the West, such as Frederic Remington (1861-1909) and Charles M. Russell (1864-1926), Berninghaus
depicted typical incidents, people, and scenes of daily life in a realistic, unromanticized way. His favorite subjects were the Pueblo Indians and the New Mexico landscape. Berninghaus was a friend of the Taos Indians, and one of few white men allowed in the sacred kivas of the Pueblo. He paid Taos Indians to model for his work.

Berninghaus was largely self-taught, and by the end of the nineteenth century he had been working as a commercial artist for almost ten years: first as a runner for the St. Louis firm Compton and Sons, then as a printing apprentice in lithography at Woodward and Tiernan. He developed an interest in art at an early age, and honed his skills during three terms of night classes at the St. Louis School of Fine Art in 1894. He made his first trip to New Mexico in 1899 as a guest of the Denver and Rio Grande Railroad. There Berninghaus prepared promotional sketches designed to lure Easterners to the West. He started in Denver, and then headed south into New Mexico. The brakeman noticed that Berninghaus stepped off the train to sketch his surroundings during each stop, and suggested that the artist visit Taos, a picturesque town twenty-five miles away from the rail’s route. Berninghaus decided to stop at Taos, a trip that changed his life. Despite the crude travel conditions, he found that his new surroundings suited him perfectly. Thereafter he spent the winters in St. Louis and summers in Taos.

Early in the century Berninghaus began a long career as a successful fine artist. In 1908 he had his first exhibition at St. Louis’ Noonan-Kocian Gallery, which showed the artist’s work during his lifetime. In the teens Berninghaus maintained a studio in downtown St. Louis, where neighboring artists included Charles M. Russell. He received the first of many major commissions from Anheuser-Busch Brewing Association in 1914, and painted five lunettes for the Missouri State Capitol in 1921. With his reputation firmly established, Berninghaus and his family permanently settled in Taos in 1925. 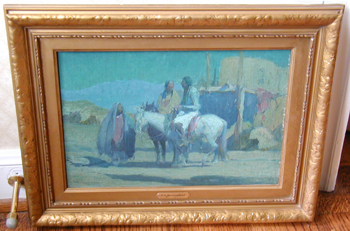