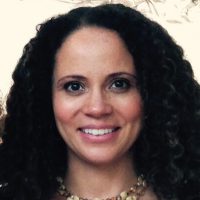 As a woman of mixed heritage, I use the “Topsy-Turvy doll” as a metaphor for the way we learn to define ourselves as women in a society that is increasingly diverse and complex and where we are redefining our roles. The doll, whose name is derived from the character of Topsy in the Harriet Beecher Stowe novel, Uncle Tom’s Cabin, is designed to look like a southern belle on one side, but her dress conceals a black girl underneath. Through the flip doll, I explore my personal expression of self, as a biracial-woman, and play with the metamorphosis of identity. I am also interested in the ability of this subject matter to address femininity as it relates to cultural constructs including class, race, and sexuality. The complexity of identity is one of transformation and redefinition: it is mutable.
These dueling images deal with some of the complexities of identity. Much of the work is autobiographical; it is the personal versus the public persona that I am exploring. The internal self, and the self we project out to the world, are often disparate or opposing, sometimes in subtle ways. As I continue to paint these dual women, I find deeper layers that tell more complex stories about who we are and who we pretend to be.
This idea of the binary has been a continuing theme and I am currently exploring ways to expand and develop this work allowing it to take on more depth and nuance. I have found that my subjects often guide the direction of the final image through their personal stories, body language, and self- identity. Their own personal complexity adds layers of meaning to the work while allowing for multiple interpretations of the final image. Thus, revealing the humanity and interconnectedness of all people.
I am also exploring a second series of work that addresses the absence of Black women in traditional western art, in particular paintings from the mid-18th to late 19th century that depict women in domestic interiors. I am interested in situations in which the Black female body is portrayed as the “other”–its presence in relation to the environment and the other figures in the painting. My work is a critique of and response to this ‘othering’ of the Black woman.

Nina Buxenbaum was born in Brooklyn, New York in 1974. She received her MFA degree in Painting from the Maryland Institute College of Art and her BFA from Washington University in St. Louis in Drawing and Printmaking. Ms. Buxenbaum has participated in residencies at the Cité Interational des Artes in Paris, France, the Skowhegan School of Painting (Skowhegan, MN), The Artists Alliance (NY, NY), and The Byrdcliff Artist in Residence, (Woodstock, NY), the Vermont Studio Center (Johnson, VT), and The Hambidge Artist Residency (Rabun Gap, GA). Her work has been included in several exhibitions including the Studio Museum of Harlem (NYC, NY), The Slater Museum (Norwich, CT), The Painting Center (NYC, NY), the Kentler International Drawing Space (Brooklyn, NY), the Ingalls Gallery (Miami, FL), Rush Arts (NYC, NY), The Sampson Projects (Boston, MA), including a solo show at The Stella Jones Gallery (New Orleans, LA). She is currently represented by Galerie Myrtis (Baltimore, MD). Her work has been reviewed in the International Review of African American Art. She is a member of the Silvermine Guild of Artists in New Canaan, CT. She is an Associate Professor at York College, CUNY, in Jamaica, NY, and Coordinator of the Fine Arts Discipline in the Department of Performing and Fine Arts. She maintains and active studio practice in Brooklyn, NY and Bethel, CT. 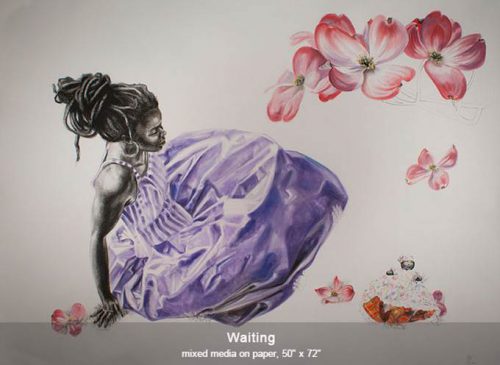