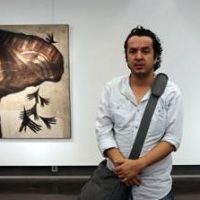 Informed by readings in literature, philosophy, and theory, many of Nihad Al Turk’s deeply psychological compositions can be read as allegorical self-portraits. Central to his work are thematic explorations of the endurance of man amidst the power struggles of good and evil—an existentialist question that has engrossed the artist for some time. Al Turk’s regular cast of imperfect creatures, mythical demons, still lifes, and botanical elements serve as the symbolic outcasts, anti-heroes, and rebels of a harrowing narrative. Recently, he has set aside the dark palette of his earlier mixed media paintings by injecting vivid hues in the form of solid colour fields that accentuate figures. This visible sense of optimism is juxtaposed with the quieting of his protagonists through a physicality that is robust and no longer disfigured as they finally escape the weight of their world.

Born in Aleppo, Syria in 1972, Nihad Al Turk lives and works in Beirut. A self-taught artist, he began drawing at a young age and pursued painting in his adolescence prior to launching his artistic career in Syria in the late 1990s. Selected solo and group exhibitions include Ayyam Gallery Beirut (2011); Ayyam Gallery Damascus (2009); the Museum of Modern and Contemporary Art, Damascus (2009); Park Avenue Armory, New York (2008); Mark Hachem Gallery, New York (2008); Diyarbakir, Turkey (2005); and the Latakia Biennale (2003), where he was awarded the Golden Prize.
http://www.ayyamgallery.com/artists/nihad-al-turk/bio 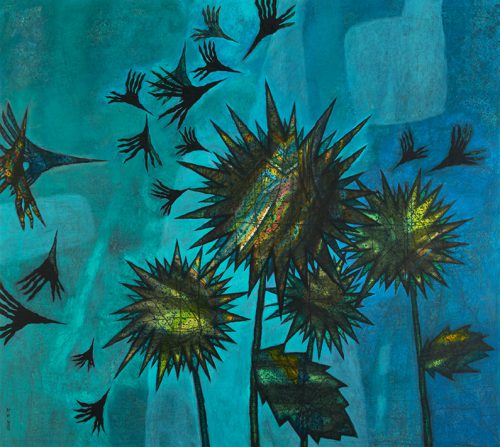