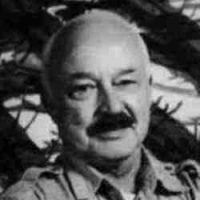 Neil Welliver was an American-born modern artist, best known for his large-scale landscape paintings inspired by the deep woods near his home in Maine.

Welliver was born in Millville, Pennsylvania. He graduated from the Philadelphia College of Art (now part of the University of the Arts) and then received an MFA from Yale University. At Yale, he studied with the abstract artist Josef Albers. Welliver taught at Yale from 1956 to 1966, and in 1966 began teaching at, and eventually became chairman of, the University of Pennsylvania Graduate School of Fine Art, from which he retired in 1989.

While teaching at Yale, Welliver’s style evolved from abstract color field painting to the realistic transcription of small-town scenes in watercolor. In the early 1960s he went to Maine, where he began painting figures outdoors, the large oil paintings often focusing on his sons canoeing or female nudes bathing. In 1970 he moved permanently to Lincolnville, and by the mid 1970s the figure as subject had given way to the exclusive study of landscape.

His mature works, often as large as 8 by 10 feet, are at once richly painted abstractions and clear representational images of intimate Maine landscapes, taking as their subjects rocky hills, beaver houses, tree stumps, and rushing water, occasionally opening out to blue cloud-laden skies. Carrying his equipment on his back, Welliver hiked into the woods to make plein-air sketches, later expanding them into large paintings in the studio, meticulously starting these canvases in the upper left-hand corner and finishing in the lower right. If the finished paintings were vibrantly painted, containing “an emotional intensity that goes beyond the ordinary limits of realism”, they also tended to be emotionally sombre. 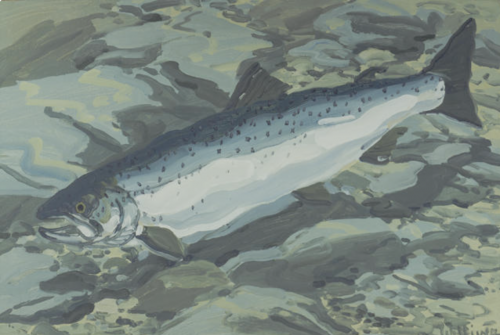