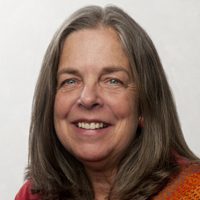 My work in fiber began in the 1960’s when I wanted to manage a gallery in California. For a number of years, I enrolled in craft classes at night and on weekends as I worked as a librarian by day. Then, when I attended my first basketry workshop in New York City in the early 1970’s, my career direction changed completely. Initially, I only wanted to twine and plait nonfunctional baskets.

My first trip to Japan in 1986 changed my focus once again. I became intrigued and excited by bamboo, bamboo basketry and much more. I sketched newel posts, sculptures, stones, signs, ikebana flower arrangements, fencing…almost anything that was stationary. Those diverse influences became an intimate part of my esthetic vision as seen with pieces like Katachi Tea Jar, Kanji Jar, Night Ferry to Beppu, and long series such as Sabi Tea Jar, Asian Markets and Jakago (snake basket). When working on these pieces, I try to imbue my work with the memories of sights, sounds, textures, and places encountered during many work trips to Japan.

These return trips and another to India have reinforced this idea of working from artifacts of a culture, but adding something from myself. For example, for the Embassy in New Guinea, I constructed wall pieces based on armor and Japanese fence construction. The primary materials were hand-painted chamois and torched copper and screening. A grouping of vessel forms in black and torched copper accompanied the wall pieces. Some of the wrapping on the vessels reflected wrapping I had seen on torches from that culture. For Asian Markets: Honolulu Chinatown I had a wall-mounted shelf built and I painted it white. I collaged it with old book pages with Asian calligraphy, pages from calligraphy practice books and white Chinese calligraphy paper. Pyramid-like packages were constructed from the same papers and acrylic medium to make them stiff. I twined black waxed cotton over a wooden jar and lid purchased in a Hawaiian flea market and a soup bowl lid closed a second vessel of the same material. Altogether I created seven, original handmade vessels that I placed on the 27 inch shelf with room for the client to rearrange and add personal treasures.

Closer to home, I have always been fascinated with closed jars. In fact, I still have one of my mother’s button jars. Our farmhouse pantry was filled with jars of ruby red pomegranate jelly, golden honey, and canned apricots and peaches from my grandfather’s orchards. Most of my jars are closed at the top with treasured pieces – carved cinnabar lids, antique Japanese netsuke, iron lids from tea ceremony water jars. I often place some secret object inside. My favorites are the Japanese divining papers, omikuji.

The traditional basketry technique of twining allows me to make firm vessels using softer cords. Waxed linen and cottons are materials I use frequently. Hemp ropes and cordages, leather and leather cordages add texture and visual interest. When larger twined pieces are needed, I carve industrial foam and twine over that sculptural form.

Plaiting is another traditional technique I use often – sometimes as an exoskeleton over a twined piece, sometimes standing alone, sometimes covered with a “skin” of handmade paper. Plaiting requires stiffer materials of equal width. I most often use dyed cane and bamboo. However, occasionally, I use only paper strips (from local magazines or newspapers) for smaller, geometric forms.

Commercial screening can be cut, folded and stitched into beautiful forms. When the surface is covered with handmade papers (applied with acrylic medium or methyl cellulose), the paper shrinks into a skin-like surface, and the woven grid of the screen is revealed. Many of these vessels reflect back to the forms Native Americans created with bark. 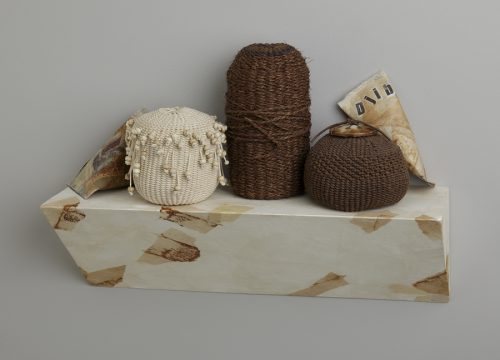 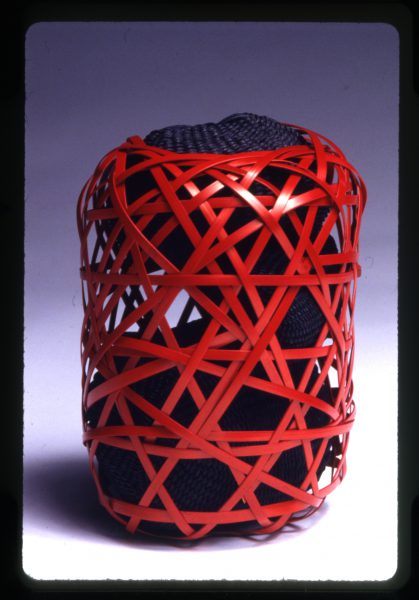 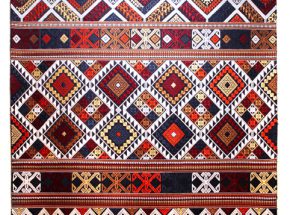