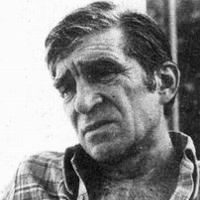 Miroslav “Mika” Antic (March 14, 1932 – June 24, 1986) was a Serbian poet, movie director, journalist and painter. Antic was born in Mokrin, Kikinda municipality, Vojvodina, Serbia (then Yugoslavia). He had six children. His oldest son, Igor Antic, is a visual artist.
He wrote poems, articles, dramas, movie and TV scripts and documentaries. As film-maker, he was considered as a part of the “Black Wave” of the Yugoslav film. His films, in particular “Breakfast with the devil” in whom Antic criticized the double morality of the communists at the Tito’s time, were forbidden and destroyed. They were rediscovered and restored in the end of the 90s. Mika also acted in several movies, and was a painter. His best known poem is “Srem”, in which he mourns for dead in World War II and describes the beauty of Srem using “becarac” song form. He is well known as a bohemian.
Mika Antic is best known as a children and youth poet, a master of delicate and gentle sentiments.