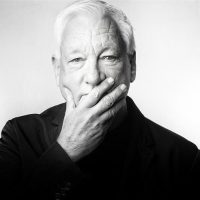 Michael Craig-Martin was born in Dublin Ireland in 1941. He grew up and was educated in the United States, studying Fine Art at the Yale School of Art and Architecture. He has lived and worked in Britain since 1966.

His first solo exhibition was at the Rowan Gallery, London, in 1969. He participated in the definitive exhibition of British conceptual art, The New Art at the Hayward Gallery in 1972. His best known works include An oak tree of 1973, in which he claimed to have changed a glass of water into an oak tree; his large-scale black and white wall drawings; and his intensely coloured paintings, installations, and commissions, including the European Investment Bank in Luxembourg, the Laban Dance Centre in London (in collaboration with Herzog and deMeuron), the DLR station at Woolwich Arsenal, and, most recently, the HDI Gerling Headquarters in Hannover.

Over the past forty-two years he has had numerous exhibitions and installations in galleries and museums across the world, including the Centre Pompidou, Paris, and MoMA, New York, the Kunstvereins in Dusseldorf, Stuttgart, and Hannover, at IVAM in Valencia, and Kunsthaus Bregenz. He represented Britain in the 23rd Sao Paulo Biennal. A retrospective of his work was presented at the Whitechapel Art Gallery London in 1989, and a second at the Irish Museum of Modern Art in Dublin in 2006.

Recent solo exhibitions include Less is still more at Krefeld Museum Haus Esters, Sculpture at Chatsworth House in association with Gagosian Gallery, Objects of our time at Alan Cristea Gallery, and NOW, a touring exhibition in China.

Craig-Martin is well known to have been an influential teacher at Goldsmiths College, London. He was a Tate Trustee from 1989 to 1999, was awarded a CBE in 2000 and was elected an RA in 2006. 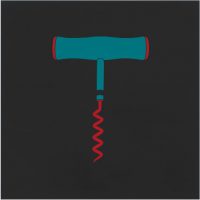