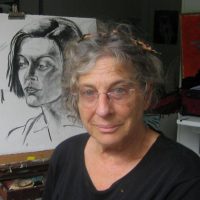 Frank was born in London, England in 1933, and moved to the United States in 1940. In 1950 Frank studied drawing with the German expressionist painter Max Beckmann at the American Art School in New York, and began woodcarving in the studio of the sculptor Alfred van Loen. She currently lives and works in New York City, where she has taught at the New School for Social Research and Queens College.

Frank was included in the 1973 Whitney Biennial, The Whitney Museum of American Art, New York, and has received numerous awards including a Guggenheim Fellowship for Graphics in 1973, and later the Guggenheim Award in Sculpture in 1983. In 1984 Frank was elected to the American Academy and Institute of Arts & Letters. She received the Lee Krasner Award from the Pollock-Krasner Foundation in 1993 and the Joan Mitchell Grant Award in 1995. Her works are found in such public collections as the Art Institute of Chicago, Illinois; the Brooklyn Museum, New York; the Hirshhorn Museum and Sculpture Garden, Smithsonian Institution, Washington, D.C.; and the Metropolitan Museum, the Museum of Modern Art, and the Whitney Museum, all in New York City.