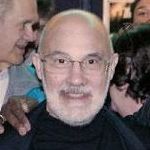 In 1982, Marty LaVor turned his hobby into a career as a full-time freelance photojournalist. Since that time he has taken over one million photographs. He travels extensively and has photographed in over 100 countries, specializing in candid work. His photographs are used in newspapers, magazines, newsletters, corporate reports, political campaigns, posters and books. He has had 35 one-man exhibitions and his work is held in private collections throughout the world.

LaVor’s work has received many awards, most notable, the International Photographic Council of the United Nations “Leadership Award” and the prestigious Kodak Gallery award.

Prior to his career as a professional photographer, Marty LaVor had already achieved an impressive list of personal accomplishments. He earned a Doctorate in Special Education, was an Industrial Arts teacher, a department head of a public school, Executive Director of a rehabilitation training program for retarded and physically handicapped women, Senior Professional for the Alabama Technical Assistance Corporation, Senior Federal Regional Officer for the Southeast Office of Economic Opportunity, Senior Professional Staff member for the U.S. House of Representatives Education and Labor Committee, Consultant to the U.S. Senate Committee on Aging, and Consultant to the U.S. House of Representatives Select Committee on Hunger. After he retired from the U.S. Congress he established The LaVor Group, specializing in political and public services.