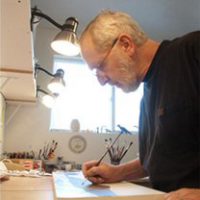 “A man came into my studio on a Gallery Stroll evening last year and commented, “ ‘You really like to paint dirt, don’t you?’ The only answer that would have been worse than ‘no’ would have been ‘yes.’ Nothing is simple.

The stretches of badlands that people ignore as they drive by on their way to somewhere grand are often my subject. Discovering, then pointing out through the act of painting, the beauty that lies hidden just below the surface of the subtile film that covers our eyes, is what engages me.

When people think of Contemporary Western Art, they most often think of art that has co-opted the devices of the 20th century avant garde to treat Western themes. Sometimes nostalgic, sometimes ironic, much fine work is being done in that area. But that is not what I am doing. I guess I am painting dirt.

The unvarnished present seems to me engaging and beautiful enough. I look no further. Western landscape painting has focused on the grand vistas, the welcoming comfort of aereable land or the romance of an imagined past. And I do some of that as well. But I want to enlarge the definetion of the beautiful that emerged from that aesthetic.”

Mark Knudsen studied fine art at the University of Utah, where he was given the Painting Award in 1969–70. From the early 1970s until 2004, he was a member of the Art Department at the Salt Lake City, Utah “Tribune,” and held the position of Head of Design for Features from 1989 to 2001. During his time at the “Tribune” he wrote environmental, arts, and humor for the paper, and was nominated for the Pulitzer Prize in 1992 for a collaboration with Tom Wharton. Along with Tim Kelly and Neil Passey,he wrote and illustrated “Utah, Gateway to Nevada,” in 1984. He has worked in the graphic design and illustration fields on a wide range of endeavors that include set design for Repertory Dance Theater, cartooning for the “National Lampoon,” wildlife illustration, story illustration, and various kinds of design in a variety of media, both painterly and digital.

His artwork has been exhibited in a number of one man shows at Ken Sanders Rare Books, Phillips Gallery, and Patrick Moore Gallery, all in Salt Lake City; Johns’ Western Gallery, San Francisco; and Iron Horse Gallery, Park City, Utah. His work has been accepted into the C.M. Russell Auction, in Great Falls, Montana; the Santa Fe Auction, New Mexico; “Out West, The Great American Landscape” exhibition touring China; the Springville Spring Salon; and the Bountiful-Davis Statewide Competition. Knudsen has work in the permanent collection of the Salt Lake City Art Center and numerous private collections. 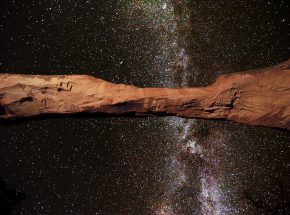