Walking up the stairs to Marjorie Guyon’s studio on Upper Street, one begins to get the feeling that you are somehow no longer a resident of Lexington, KY. Guyon’s studio consists of several rooms covered from wall to wall with mixed media collage-paintings that immediately resonate with a sense of some distant time and place. Upon talking to the artist, this sense of dislocation begins to make some sense. Guyon, originally from New York, has arrived as an artist through a series of unexpected journeys and circumstances that have resulted in both a personal and artistic diaspora.
As a student at Hampshire College (Amherst, MA), Guyon knew she wanted to become an artist. However, she soon came up against an educational system that relied more on the personal tastes of its professors than the notion that all students should have the opportunity to study their chosen field. The artist recalls, “The two art professors would work with whomever they thought they could work, and neither one thought he could work with me. So I began to study poetry.” In fact, she got her degree in poetry and graduated college with ambitions of becoming a writer.
After moving around the country as a writer, Guyon ended up in Lexington and soon came to a stark realization: “One day I was working on an IBM Electric Typewriter. When the typewriter began to malfunction, I got under the table to fix it, and I thought, ‘I never wanted to do this; I want to be a painter.'” Thus, with a degree in poetry and no connections whatsoever to the art world, Guyon began to paint. In 1980, after building up a body of work, she began to send out slides to galleries all over country and got one response. That response came from Madison Avenue dealer Merton Simpson, an owner of an African art gallery who was simply struck by Guyon’s work. After receiving a phone call, the artist drove straight to New York to meet the dealer. He was soon selling her work to collectors in New York and Paris. This meeting essentially set off a chain of events that has lead to the scenario of a painter who lives in Lexington yet shows and sells the majority of her work far from Kentucky.
When asked about this unlikely situation, Guyon concedes, “I think it’s normal for an artist to feel like they need to live in a center of the art world like New York. But it can really work a number of different ways, and it only really takes one collector falling in love to get things going.” Moreover, the artist views ending up in Kentucky as being key to the development of her work: “Here, I don’t feel any pressure to have to be part of the latest artistic trend in order to make it. That sense of space and distance has enabled me to investigate my own vision.”
And Guyon’s vision is one which speaks strongly of her origins in poetry. Her paintings set centrally located, page-size collages in large color fields whose time-worn umbers and ochres seem to suggest a sort of relic or shrine for their sacred subjects. She describes the collages as “pages from an ancient book” not unlike an artifact that one might find on an archeological dig. Accordingly, the collages look as if they could be thousands of years old, with frayed edges, fractions missing, and faded colors. As for the subject matter, the artist speaks of looking for essential elements that reflect knowledge from the past that needs to endure and be upheld. “These are the most important things that one would want to pass on to their great-grandchildren; the things that they will need to remember,” Guyon says. Thus images of animals and natural forms tend to become idylls that celebrate the innate purity of their subjects.
As a result, one might expect the paintings to be formed around the collages. However, it works in the opposite manner: “Initially, I’m looking for something that works with the colors of the painting; then I work with the collage until it’s telling me something.” While unexpected, the process does seem to correspond to the idea of paying respect to the essential elements that constitute a foundation. In this case those elements are formal components of composition and color which create a framework which can then be built upon. 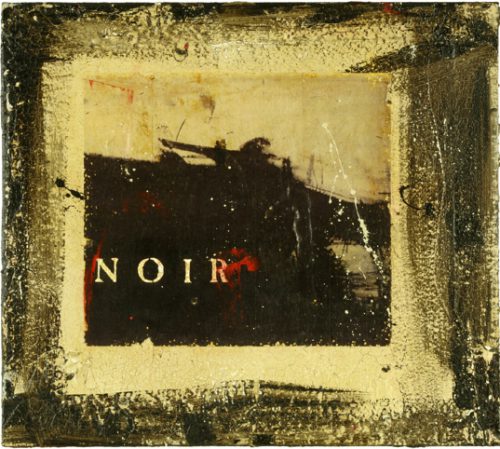