Marion was born in Calgary and studied art at the Ontario College of Art in Toronto, the Institute of Technology and Art in Calgary, and the LCC School of Arts and Crafts in London, England.

Marion taught design and crafts at the Provincial Institute of Technology and Art (now ACAD) until 1966 and was its first woman instructor. She was also the first woman on the prairies to become a member of the Royal Canadian Academy.

She was a staunch member and supporter of the ASA, and also a member of the Print and Drawing Council of Canada. In 1958 she was awarded a Canada Council Grant and received the Province of Alberta Achievement Award.

Marion produced strong watercolours, drawings and oils through the 1930’s, 40’s and 50’s. While teaching at the Banff School, she met Jock MacDonald who introduced her to automatic drawing which became a bridge to her later abstract works. In 1957-58, Marion studied at Emma Lake with New York artist Will Barnet, and later attended the Art Students League of New York.

With the assistance of a Canada Council Grant, the Nicolls went to Europe in 1959 and returned to Calgary in the 60’s to produce a prolific amount of new work.

Her paintings and prints are distinctive in their bold composition and imagery. She experimented with many print-making techniques, including woodblock and clay prints. Marion was probably the first artist to work with the Apple computer (using the “MacPaint” program) to produce limited edition prints. 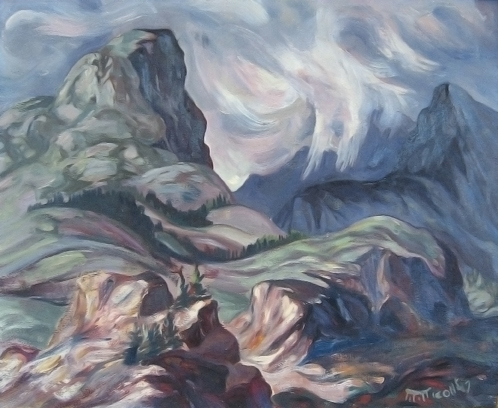