Marilyn Brent was born in Williamstown, Massachusetts but grew up in the Philadelphia suburbs. Brent received her bachelor of fine arts degree from The Maryland Institute College of Art in 1975 as a crafts design major. After experimentation in multiple craft and design media, she returned to a focus on oil painting which led to a masters degree from the Pennsylvania Academy of the Fine Arts in 2000. That same year she began teaching design at the Richard Stockton College of New Jersey, where she continues to offer classes in drawing and painting.

Brent has received awards for her work and exhibited in many solo and group shows in galleries and museums in New Jersey. She was documented on New Jersey television’s State of the Arts in 2001. In 2004 the United States Department of State exhibited two New Jersey landscapes in the American Embassy in Minsk, Balarus. Those paintings are currently hanging in the President’s suite at The Richard Stockton College of New Jersey. One of them depicts Stockton College?s Lake Fred. Another New Jersey seascape is on display at New Jersey’s Cape May County Courthouse.

Marilyn Brent has painted many landscapes that depict real places near the New Jersey Shore. Southern New Jersey surroundings have figured prominently in her paintings, which also include portrait and genre subjects. Brent paints from life studies, sketches, and photographs in her medium of choice oil on canvas. Her painting process is sometimes simple and direct, but often includes layers and repainting. Brent’s palette is mainly comprised of earth colors and a few prismatics. Her works are driven by emotion and intuition; she does not view her daily encounters lightly, nor take the landscape surrounding her home for granted. ?My landscapes depict the familiar, she states, yet I hope to present it with a modicum of apprehension or mystery. 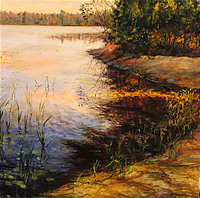