Marie Løkke (also known as Mrs. Finn Mathiesen) was born in Christiania (Oslo), Norway, the daughter of C. Løkke. After studying art in Norway with Harriet Bacher, and in Dresden for 5 months during 1900-1901, she came to the United States in 1902. In America, she studied with Charles W. Hawthorne in Provincetown, MA. She remained in the United States until 1916, then lived in France and Belgium from 1918-1922, returning to Norway at the end of that time. She was married in 1903 to Finn Mathiesen, an engineer in Chicago, but later divorced.

Løkke was particularly known for her portraits of children, landscapes, marinescapes and genre paintings. She exhibited at Marshall Fields in Chicago, IL, in 1908 and the Art Institute of Chicago between 1902 and 1916, winning prizes on several occasions. Her biography was included in their publication “Works by Chicago Artists.” She also exhibited at the Chicago Norske Klub where her work was purchased to be in the permanent collection of the organization. Her works were shown at the 1915 Panama-Pacific International Exposition in San Francisco, CA and in Provincetown, MA, in 1916. She was also included in the Salon Triennial in Antwerp, Belgium, in 1920. She had works shown at the Norse-American Centennial Art Exhibit at the Minnesota State Fair in Minneapolis, MN in 1925. More recently, her works were included in the exhibit “The Divided Heart: Scandinavian Immigrant Artists, 1850-1950” sponsored by the University of Minnesota in 1982 and in the exhibit “Norway in America” exhibit organized by the Norwegian-American Museum in 1989. 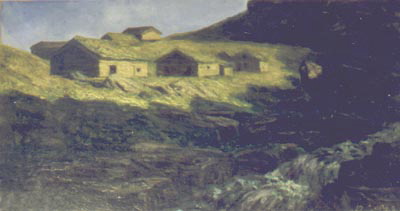