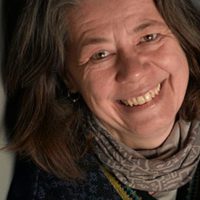 As a contributor to National Geographic for more than 16 years, Maria Stenzel has covered a wide variety of assignments, documenting indigenous groups from the rain forest to the Arctic, dinosaur digs in Madagascar, and Inca mummies high in the Andes.

But like most National Geographic photographers, there’s one region of the world that keeps calling her back. For Stenzel, that place is Antarctica and its frozen underworld of big seas, icebergs, sea ice, and the largest concentration of wildlife on Earth—not to mention the world’s largest icecap.

Her Antarctic work began in 1995 with a voyage by icebreaker to study the winter sea ice of the Southern Ocean with a team of scientists from the National Science Foundation. More projects have followed—the ice-free Dry Valleys, Sir Earnest Shackleton’s heroic journey across South Georgia, a survey of scientific research in Antarctica, and the South Sandwich Islands.

Stenzel grew up in Ghana, the Netherlands, and New York. She has lived in Washington, D.C., since 1980, when as a young college graduate she came to the capital city looking for work. Armed with a bachelor’s degree in American Studies from the University of Virginia, she personified a typical liberal arts student—interested in everything and qualified in nothing. An entry-level job at National Geographic introduced her to the world of photojournalism, and she has been on that journey ever since.