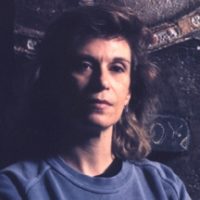 In the Washington DC area, where she lives, her work has been exhibited at the Ellipse Arts Center, the Arlington Arts Center, Flashpoint, Warehouse Gallery, Washington Square, the McLean Project for the Arts, the Washington Project for the Arts, Maryland Art Place, the Baltimore-Washington International Airport, Reagan Airport, School 33 Art Center, Gallery 10, The C. Grimaldis Gallery and in many other venues. She was represented by Gallery K from 1987 until it’s closing in 2003.

Karametou’s work is in permanent collections worldwide such as the Vorres Museum of Contemporary Art, Athens, Greece, the Baltimore Museum of Art, and was included in the collection of His Excellency the U.S. Ambassador to Greece and Mrs. Thomas Miller during his tenure. It was also featured in the official 2006 desk diary, U.S. Dept of State, Vienna, Austria for use by all U.S. Embassies worldwide.

Karametou is the recipient of many awards such as Individual Artist grants from the Maryland State Arts Council, and has participated in several Biennial Exhibitions including the ARTSITES ’96 Regional Biennial and the Maryland State Biennial, Baltimore Museum of Art, for which she received the First Prize. In 2010 she was a Senior Fulbright Research Scholar for work in Istanbul, Turkey.

Other professional activities involve the International multi site project “Penelopeia” and being a visiting artist at the international symposium “Earth” at the Skopelos Foundation for the Arts in Skopelos Island, Greece. She sits on the Board of Directors of the Arlington Arts Center, Virginia.
Reviews of Karametou’s work include among others: The Washington Post; the Baltimore Sun; the New Art Examiner; Washington City Paper; Baltimore City Paper; The Evening Sun; To Vima; the Kathimerini; Epikera magazine; the Voice of America; The Alternative; Washington Review; Eikastika Magazine; National Herald; Hellenic News; VOGUE magazine (Greek Edition) and an “Antenna” Greek National Television interview (2004). Her work is also included in the book “The Power Of Visual Logos” (ICAN 2003).

“My work relates to Identity and our own personal journey for self-discovery” Karametou says. “I grew up in Athens with her odd mixture of the ancient and the modern, and because of that I have always been acutely aware of the enigma of Time. I am intrigued by our journey through time (as individuals and as civilizations), by the marks it leaves on people and things and by all we create in our struggle to resist and survive. I work in mixed media, incorporating in my pieces seemingly unrelated objects and materials; what interests me is to transform them to reveal their poetry —and to speak about what I know, who I am, what my relationship is to the world and, ultimately, about the human experience.” 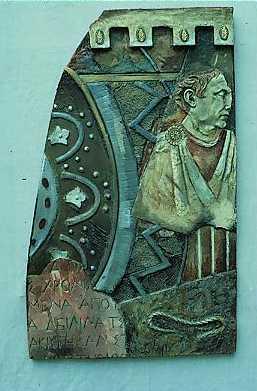