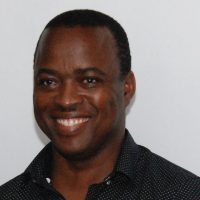 Marcel Pinas is a Surinamese artist born in Moengo, Pelgrimkondre, a district of Marowijne in north east Surinam. After graduating in 1990 from the Nola Hatterman Institute in Suriname, he continued his education at the Edna Manley College in Jamaica. In 2007 Pinas became ’artist in residence’ at the Rijksakademie in Amsterdam, the Netherlands: a prestigious program for a select group of promising artists.

Pinas’ source of inspiration is the cultural heritage of the Surinamese maroon community of the N’dyuka, also known as the Aucaners, descendants from runaway African slaves who in the South American jungle held on to their own culture and beliefs.

In addition to the preservation of his own past, Pinas uses colors and symbols that are a direct reference to the N’dyuka culture. These symbols taken from the Afaka syllabary (a syllabary of 56 letters devised from the N’dyuka language). Combined with everyday objects from his culture as carvings, plaid fabrics or textiles and totems they form the basis of his artworks.

Pinas believes that art is a part of every culture, and every level of society. It nurtures the community. With his paintings, sculptures and his big multimedia installations in public spaces Pinas tries to connect people and build towards a community with a critical, but also positive perspective for the future. In 2010 Pinas founded the Tembe Art Studio to share his experience and knowledge with the Surinamese community, starting in Moengo, in his birth district Marowijne, followed by the opening of the Contemporary Art Museum Moengo (Camm) in July 2011. In this way Pinas wants to motivate and stimulate especially the youth, to develop their talents.

His work is included in both private and public collections, including the Tropen Museum, Amsterdam.