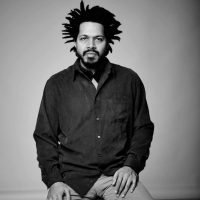 My practice is driven by my connection to the trans African-Atlantic diaspora. I recognize both my ties and disjunction from an ancestral past by considering the possibilities of genetic imprints, cultural identification, innate and intuitive beliefs and a conscious seeking of links that reveal continuities that are hidden or largely unsuspected by the mainstream. I imagine myself as an Urban Shaman exploring both my familiar visible world and the hidden dimensions of other realms that lurk beneath the surface of daily life. The sense of personal cosmology in my practice grows from both experiencing and observing the details of everyday life and ritual. Artworks emerge out of the crossroads of life, history, memory and imagination, a place between that suggest multiple layers of meaning. Inspiration is derived, in part, from the various modes of communication that I have studied and encountered in African-derived rituals.

My work includes painting, performance, sculpture, sound, and installation. I work from the inside out relying on intuitive decision-making and a commitment to investigating deeply personal experiences of identity, ancestry, family, community and spirituality. Information is drawn from the uniquely shared history of code switching, double-consciousness and multiple narratives that people of African descent have inherited and are compelled to adopt as a survival strategy for daily life. Like this common experience my work straddles two worlds. The art that I make does not exist solely within a Western art frame but embodies the dynamics of being both sacred and secular. At the same time I consistently look at western art historical constructions, modalities of thought and contemporary discourse to inform my practice while centering my work in community practices and rituals, drawing personal inspiration from the spirit and the oral traditions of the African ancestors that came across the Atlantic ocean during the middle passage slave trade.

Currently, I am developing three related but distinct series. Afrospanglish, a cycle of paintings that emerge from my series called Signatures. Afrospanglish explores and develops many of the original, ideographic, visual strategies of the Signatures series but also incorporates the idea of conflating personal cosmology and abstract-figuration that generate compositions characterized by large heads which function as conduits or metaphors for cultural/personal memory, inner-worlds, ancestors, spirits or universes akin to the cosmology of Bakongo-derived ritual charms known as nkisi. An nkisi, is an object said to be a miniatured world; a central ritual object that partakes of oral traditions, natural forces, ancestral spirits, divination and the ritual complex of the Bakongo. Concurrently in progress, is a mixed-media body of works with the working title Kalunga Inbetween Worlds (K7), which explores themes, materials and colors related to Kalunga (an ocean deity associated with the Bakongo people of Central Africa and who were brought into the New World in significant numbers). Also, an ongoing series of sculptures that I began in the summer of 2012, called Paraphernalia Of The Urban Shaman M:5 (POTUS M:5). These projects are connected conceptually but remain visually distinct through different choices in material, form and structure.

Within African cosmology, our ancestors live in both the past and the present this is central to my work as an artist. POTUS M:5 grew as a visceral response to various kinds of power-objects that I encountered studying Bakongo culture in particular minkisi and makutos. In August of 2010, I was initiated into the branch of Palo known as Briyumba. Also, March of 2014, I was initiated into the oldest house of Palo, belonging to the Mayombe branch: a ritual complex whose chief aim is to transform, heal, and harmonize individuals and families with nature, community, and the ancestors. As a result of my first initiation, I began creating an ongoing body of paintings that I refer to as Signatures inspired by the ideographic writing system I encountered in the ritual-context of both Mayombe and Briyumba ceremonies in NYC.
[http://www.leonardobenzant.com/new-page-1/] 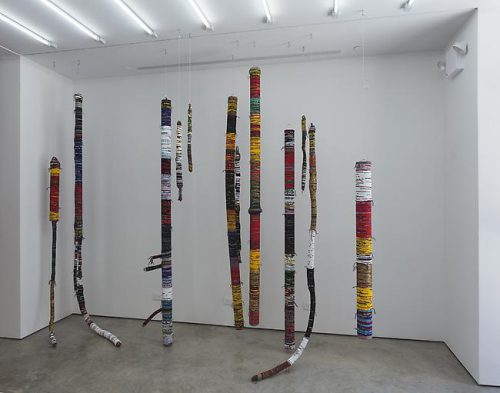