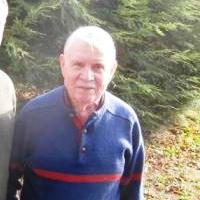 The son of Calvin and Della Craig, he was born in Springfield, MA on April 11, 1926 and raised in Shawmut. The day after graduating from Lawrence High School in 1944, Leonard was called to military duty and served his country with distinction in the Philippines receiving the Purple Heart and the Bronze Star. Following the war, he entered the New England Art & Design Institute in Boston and later, Boston University where he completed his BFA. In 1954, he reentered military service and studied to be a language translator.

Following the Korean War, Leonard painted the reredos for St. Mary’s Church in Asheville, N.C. There he received a grant to study for a year with Pietro Annigoni in Florence, Italy. He continued his studies at the Accademia di Belle Arti for eight more years where he earned a PhD under the direction of Sergio Scatizzi. In 1964, he was commissioned to design the holy vestments of H.H. Pope Paul VI for which he received a Papal Medal of Recognition. From 1966 to 1972, Leonard taught at The Asheville School in North Carolina and at West Carolina University while maintaining an apartment in Florence.

In 1972, Leonard joined Unity College. During his 20 year tenure, he played a pivotal role in developing Unity’s art and humanities disciplines. Following retirement, he was awarded the status of Professor Emeritus. In 2003, he was further honored by the dedication of the Leonard R. Craig Art Gallery at Unity College.
Leonard has exhibited throughout the U.S. and Italy. Institutions and individuals including the Florence Museum of Modern Art and the Vatican have collected his paintings, prints and drawings. Although he has not exhibited in the past few years, he continues to be represented by the ICON Gallery of Contemporary Art in Brunswick, ME. Always a lover of nature, Leonard expressed his pastoral passion in art and the pursuit of outdoor activities.