Born in Vitebsk, Russia, Leon Shulman Gaspard was the son of a retired Russian army officer. Along with Marc Chagall, he studied painting under Julius Penn, a significant Post-Impressionist artist. He also studied in Odessa and Moscow before he traveled to Paris at age 17. In Paris, he studied at the Julien Academy with Edouard Toudouze and Bouguereua.

While a student, Gaspard held his first solo show. At this show, a New York collector purchased 35 of Gaspard’s Paris sketches. Gapsard went on to paint in Siberia during a two-year honeymoon with his American wife. These paintings were also quite successful in Paris.

Gaspard was a French aviator during WWI and was severely wounded. He moved to NYC in 1916. In 1918, he settled in Taos, New Mexico because of his doctors’ recommendations that he move to a warmer climate. The landscape and the inhabitants of Taos became the subjects of his colorful and freely drawn paintings.

Gaspard continued to travel and paint extensively until his death in Taos in 1918. 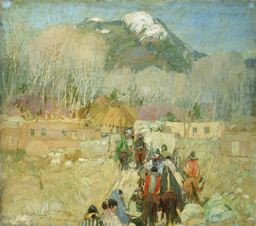