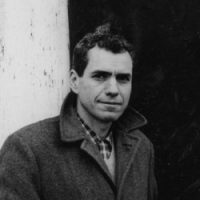 Lawrence Calcagno was born on March 23, 1913 in Potrero Hill, San Francisco, CA. His parents, Vincent and Anna de Rosa Calcagno were Italian immigrants. At age ten he moved to the family ranch-homestead in the Santa Lucia Mountains, Monterey County where he spent the following ten years. In 1935 he left the homestead and joined the merchant marines and traveled all the way to Asia.

In 1941 at the beginning of World War II Calcagno joined the Army Air Corps, where he served for three years. During his service he was recognized as an artist. His drawing titled: “Watch in the Night” won first prize in the national Army art contest in the Southwest Regional competition.

Benefiting from the G.I. Bill in 1947 Lawrence Calcagno enrolled at the California School of Fine Arts, San Francisco, CA. His teachers were Mark Rothko and Clyfford Still along with instructors, Edward Corbett and Richard Diebenkorn. In 1950 he left California School of Fine Arts for Europe. He went to Paris, France to study at L’Academie de la Grande Chaumiere. In 1951 he went to Florence to study the Renaissance. He enrolled at the Instituto d’Arte Statale.

In 1956 Calcagno accepted the position of assistant professor in the art department at the Albright Art School in the University of Buffalo, New York where he stayed until 1958. He went on to teach from 1958 to 1959 at the University of Illinois, Urbana. In 1960 he moved to New York and became a part-time instructor at New York University. In 1965 Calcagno became Andrew Mellon Professor in Painting at Carnegie Mellon University, in Pittsburgh, Pennsylvania where he stayed until 1968. 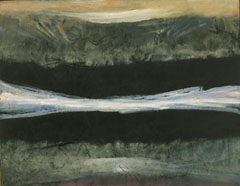